Novel associations of UDP-glucuronosyltransferase 2B gene variants with prostate cancer risk in a multiethnic study. 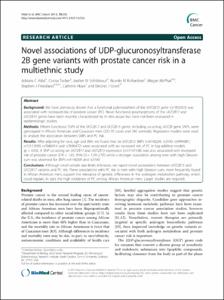 Professor Emeritus in Family Medicine and Community Health
Dr. Schildkraut is an epidemiologist whose research includes the molecular epidemiology of ovarian, breast and brain cancers. Dr. Schildkraut's research interests include the study of the interaction between genetic and environmental factors. She is currently involved in a large study of genome wide association and ovarian cancer risk and survival. Some of her work is also focused on particular genetic pathways including the DNA repair and apoptosis pathways. She currently leads a study of