Differential habitat use as a behavioral thermoregulatory strategy in lemurs 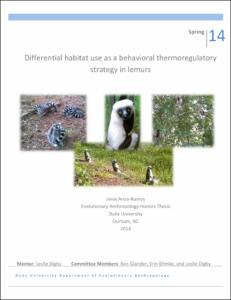 View / Download
7.9 Mb
Date
Author
Arcia Ramos, Jania
Repository Usage Stats
253
views
239
downloads
Abstract
In order to reduce the energetic cost of controlling internal body temperatures physiologically, animals engage in “behavioral thermoregulatory activities.” These strategies include changing postures, social huddling, and moving to different levels of the forest canopy in response to environmental changes. For lemurs, behavioral thermoregulation can be especially important to be able to cope with the daily and seasonal climatic variations of their habitat because they have a lower basal metabolic rate than other primates. In this study, we analyzed the patterns of temperature and humidity variation throughout the forest at the Duke Lemur Center and then analyzed how individuals of Propithecus coquereli and Lemur catta use these variations as a strategy for behavioral thermoregulation. We found that generally temperatures tended to decrease deeper into the forest, with a few deviations from this pattern during fall, and for different forest coverage. We also found that humidity generally increased deeper into the forest, although this pattern reversed for the deciduous enclosures during the fall months. When analyzing how the lemurs use the forest in response to temperature variation, we found that contrary to what we expected, individuals preferred to spend the majority of their time at “edge” or “out” of the forest for all temperatures, and spent very little time at the interior of the forest (30m or 60m). This was also the case when we controlled for sun exposure levels. However, individuals did employ other behavioral thermoregulatory strategies, including increasing extended postures during hotter temperatures and increasing tucked postures during cooler ones, yet there was no clear relationship between the employment of this strategy and the use of forest depth. Possible explanations for the data were explored, including the effect of human interaction. In order to establish more concise patterns for the use of microhabitat selection as a form of behavioral thermoregulation, further research should increase the range of temperatures and the length of the study.
Type
Honors thesis
Department
Evolutionary Anthropology
Subject
lemurs, behavioral thermoregulation, microhabitat climate variation, forest depth, temperature variation
Permalink
https://hdl.handle.net/10161/8625
Citation
Arcia Ramos, Jania (2014). Differential habitat use as a behavioral thermoregulatory strategy in lemurs. Honors thesis, Duke University. Retrieved from https://hdl.handle.net/10161/8625.
Collections
More Info
Show full item record