Circuit-Splitting the Atom: How the Nuclear Regulatory Commission and the Department of Energy Reached Different Conclusions on the Need to Consider Hypothetical Terrorist Attacks under NEPA 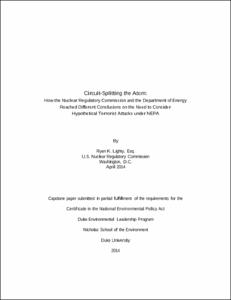 View / Download
455.5 Kb
Date
Author
Lighty, Ryan K.
Repository Usage Stats
371
views
345
downloads
Abstract
This Paper examines possible explanations for the differing policies of the Nuclear Regulatory Commission (NRC), which adopted a "Ninth Circuit only" approach, and the Department of Energy (DOE), which adopted a single nationwide policy, in response to similar adverse appellate court rulings from the Ninth Circuit imposing the requirement to consider the possible environmental impacts of terrorist acts under the National Environmental Policy Act of 1969 (NEPA). The discussion begins with a general overview of NEPA and the need to examine "reasonably foreseeable" effects of proposed Federal actions. The Paper then provides a brief overview of Federal courts and the effect of adverse circuit court rulings on Federal agencies. The examination then turns to the relevant "proximate cause" case law on intervening criminal and terrorist acts, reviews the Ninth Circuit rulings imposing the NEPA terrorism requirements, and explains how the NRC’s rejection of the Ninth Circuit approach led to a circuit split. Finally, the analysis explores the various legal and pragmatic considerations that likely led NRC and DOE, despite being similarly situated, to adopt different responses to similar adverse rulings. The author concludes that, notwithstanding the possibility of a future Supreme Court decision or Congressional action to clarify the requirements of NEPA, both approaches are workable and serve the unique interests of the respective agencies.
Type
Report
Subject
NEPA
Permalink
https://hdl.handle.net/10161/8627
Citation
Lighty, Ryan K. (2014). Circuit-Splitting the Atom: How the Nuclear Regulatory Commission and the Department of Energy Reached Different Conclusions on the Need to Consider Hypothetical Terrorist Attacks under NEPA. Retrieved from https://hdl.handle.net/10161/8627.
Collections
More Info
Show full item record