A Clonal Analysis of Zebrafish Heart Morphogenesis and Regeneration 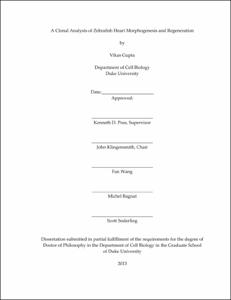 As vertebrate embryos grow and develop into adults, their organs must acquire mass and mature tissue architecture to maintain proper homeostasis. While juvenile growth encompasses a significant portion of life, relatively little is known about how individual cells proliferate, with respect to one another, to orchestrate this final maturation. For its simplicity and ease of genetic manipulations, the teleost zebrafish (Danio rerio) was used to understand how the proliferative outputs of individual cells generate an organ from embryogenesis into adulthood.

To define the proliferative outputs of individual cells, a multicolor clonal labeling approach was taken that visualized a large number of cardiomyocyte clones within the zebrafish heart. This Brainbow technique utilizes Cre-loxP mediated recombination to assign cells upwards of ~90 unique genetic tags. These tags are comprised of the differential expression of 3 fluorescent proteins, which combine to give rise to spectrally distinct colors that represent these genetic tags. Tagging of individual cardiomyocytes was induced early in development, when the wall of the cardiac ventricle is a single myocyte thick. Single cell cardiomyocyte clones within this layer expanded laterally in a developmentally plastic manner into patches of variable shapes and sizes as animals grew into juveniles. As maturation continued into adulthood, a new lineage of cortical muscle appeared at the base of the ventricle and enveloped the ventricle in a wave of proliferation that fortified the wall to make it several myocytes thick. This outer cortical layer was formed from a small number (~8) of dominant cortical myocyte clones that originated from trabecular myocytes. These trabecular myocytes were found to gain access to the ventricular surface through rare breaches within the single cell thick ventricular wall, before proliferating over the surface of the ventricle.

These results demonstrated an unappreciated dynamic juvenile remodeling event that generated the adult ventricular wall. During adult zebrafish heart regeneration, the primary source of regenerating cardiomyocytes stems from this outer wall of muscle. Regenerating cardiomyocytes within this outer layer of muscle are specifically marked by the cardiac transcription factor gene gata4, which they continue to express as they proliferate into the wound area.

Using heart regeneration to guide investigation of juvenile cortical layer formation, we found that both processes shared similar molecular and tissue specific responses including expression and requirement of gata4. Additional markers suggested that juvenile hearts were under stress and that this stress could play a role to initiate cortical morphogenesis. Indeed, experimental injury or a physiologic increase in stress to juvenile hearts caused the ectopic appearance of cortical muscle, demonstrating that injury could trigger premature morphogenesis.

These studies detail the cardiomyocyte proliferative events that shape the heart and identify molecular parallels that exist between regeneration and cortical layer formation. They show that adult zebrafish heart regeneration utilizes an injury/stress responsive program that was first used to remodel the heart during juvenile growth.