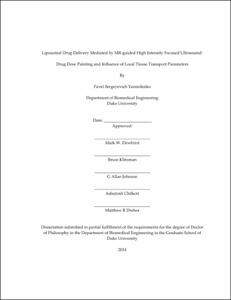 Use of chemotherapeutics in treatment of solid tumors suffers from insufficient and heterogeneous drug delivery, systemic toxicity and lack of knowledge of delivered drug concentration. The overall objectives of this work were: 1) to address these shortcomings through development and characterization of a treatment system capable of real-time spatiotemporal control of drug distribution and 2) to investigate the role of MR-image-able tissue transport parameters in predicting drug distribution following hyperthermia-triggered drug release from nanoparticles. Towards these objectives, a combination of potentially synergetic technologies was used: 1) image-able low temperature-sensitive liposomes (iLTSLs) for drug delivery, 2) quantitative drug delivery and transport parameter imaging with magnetic resonance imaging (MRI), and 3) control over drug release with magnetic resonance-guided high intensity focused ultrasound (MR-HIFU). The overall hypothesis of this work is that the drug distribution in the targeted zone spatially correlates with the image-able transport-related parameters as well as contrast enhancement due to release of contrast agent during treatment.

We began by developing and characterizing iLTSLs, which were designed using a lipid formulation similar to one that is in clinical trials in the US (ThermoDox®) and a gadolinium-based MR contrast agent that is in widespread clinical use (Prohance®) and least likelihood of toxicity due to nephrogenic systemic fibrosis (NSF). The resulting liposome was found to stably encapsulate both an anthracycline chemotherapeutic, doxorubicin, and the MR contrast agent. Release rates were similar for these two species in physiologic buffer as well as in human plasma. The next step towards control and imaging of release with this drug delivery system (DDS) was development of algorithms that allowed for large-volume mild hyperthermia with MR-HIFU that would be required to move this combination of technologies into the clinic.

Optimal drug delivery with iLTSL requires a sustained period of heating of the entire target to the range of temperatures that are optimal for liposomal release and maintenance of perfusion (40 - 45 &#61616;C). The MR-HIFU technology was developed and used mainly for rapid thermal ablation or mechanical disruption of tissue in small ellipsoid volumes. Variability and size of common clinical lesions called for modifications that would enable stable conformal heating of large tumor volumes to the sub-ablative temperature range of mild hyperthermia (40 - 45 &#61616;C). Therefore, we set out to develop an algorithm that would allow rapid attainment and maintenance of mild hyperthermia in larger volumes of variable shape that were typically encountered in the clinic. We approached this goal through a series of successive steps that addressed different aspects of mild hyperthermia treatment: 1) controlled heating to mild hyperthermia, 2) conformity of heating and 3) ability to heat large volumes.

To achieve controlled heating to mild hyperthermia we implemented a simple binary mild hyperthermia feedback mechanism that adequately maintained mild hyperthermia for extended periods of time in small ellipsoidal volumes. We then developed a conformal small-volume mild hyperthermia algorithm that could provide spatial control over heating in an environment with spatially heterogeneous perfusion. This algorithm used electronic steering of the HIFU focus to heat each MR image voxel with different power, depending on temperature measured within that voxel. Finally, to heat large volumes conformally, we developed an algorithm that combined mechanical displacement of the MR-HIFU transducer (to cover large areas) with electronic deflection of the HIFU beam (to heat sub-volumes conformally). This advancement allowed us to quickly attain mild hyperthermia (<8.1 min to steady state) in larger volumes (cross-sectional area = 8.4 cm, ~12 times larger than previous methods).

Following their characterization, we examined iLTSL pharmacokinetics and combined MR-HIFU large volume mild hyperthermia with iLTSL to deliver doxorubicin to large Vx2 carcinomas in the hindlimb muscle of rabbits. To determine MR image-able correlates to the intratumoral drug distribution, we assessed the spatial pattern of drug distribution with fluorescence microscopy and examined spatial correlations of this pattern to several parameters measured with MRI, including the spatial distributions of temperature, contrast enhancement following injection of iLTSL, dynamic contrast-enhanced MRI (DCE-MRI) parameters, and maps of apparent diffusion coefficient (ADC). Dynamic contrast-enhanced MRI parameters have been used extensively in literature to approximate a mixture of parameters critical to drug delivery, such as perfusion (F), permeability-vascular surface area product (PS) and vascular volume and ADC has been previously correlated with cellular density in tumors. Possible utility of such spatial correlations was examined for future use in treatment planning, intraprocedural feedback control and post-treatment evaluation.

Highly perfused peripheral regions of Vx2 tumors in rabbit hindlimb displayed high Ktrans and ve, indicative of high perfusion. Maps of ADC obtained with low b-values also showed high ADC in the periphery of these tumors, indicating high perfusion there. ADC maps that were weighted more towards diffusion (using higher b-values) showed that diffusion was largest in the tumor core, indicating destruction of the cellular membranes and greater mobility of water. Microscopic examination of excised tumors was spatially registered to the MRI datasets and showed that most of the tumor core is necrotic, though some highly vascularized and viable tissue was present in strands or segments that traversed the necrotic regions. Those segments also showed bright doxorubicin fluorescence following treatment with MR-HIFU and iLTSL. The two control groups - free drug and iLTSL without mild hyperthermia - showed minimal to no doxorubicin fluorescence in the tumor.

Susceptibility effects due to use of contrast agent caused large errors (up to 15 °C) in MR thermometry measurements. To address this phenomenon, experiments were designed to arrive at steady state heating (target temperature = 41 °C), and employ an algorithm to learn the spatiotemporal distribution of power that was needed to maintain steady state heating. This heating pattern was then played back several times to verify maintenance of steady state, and if satisfactory, image-able liposomes were injected. Since temperature feedback was replaced by the learned steady-state heating, injection of image-able liposomes likely did not alter the heating performance. Following injection, changes in T1 and magnetic susceptibility were most pronounced in regions that previously showed greatest enhancement during DCE-MRI and displayed larger values of ADC with perfusion-weighted, low b-value scans. Maps of T1 were obtained in real time using a variable flip angle sequence during heating, and were corrected for inhomogeneity of the B1 field and calibrated against a more accurate, T1 mapping technique.

After treatment with MR-HIFU and iLTSL, the drug was preferentially distributed in the viable tissue, in and around the tumor. Doxorubicin fluorescence was greatest in zones that were heated, though the drug distribution did not display a clear boundary between heated and unheated tissue. While iLTSL provided intraprocedural feedback via enhancement of T1-weighted image intensity, susceptibility-related effects of iLTSL on MR thermometry complicate their prospects of clinical use, where precise temperature feedback is required for control of therapy and MR thermometry techniques that are in widespread use would be affected. Spatial correlations between drug delivery with iLTSL and MR-imageable parameters may serve as a predictive tool to identify areas that will not receive adequate drug. Such a-priori knowledge of correlates to the approximate tumor drug distribution has the potential to inform treatment planning by revealing the extent to which drug dose could be painted with a combination of LTSL and MR-HIFU. These studies point to an adjustment of course in further development of drug dose painting this combination of technologies, towards informing treatment planning, and not only painting the dose, but predicting it. These results also point to the need to develop rational combinations other treatments, such as ablation and radiation, to treat regions that will not receive sufficient drug.