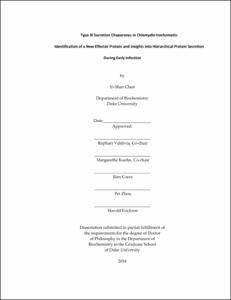 Chlamydia trachomatis, the causative agent of trachoma and sexually transmitted infections, employs a type III secretion (T3S) system to deliver effector proteins into host epithelial cells to establish a replicative vacuole. Although the temporal manner in which effectors are secreted is important for the proper manipulation of host cell functions, the mechanism remains a mystery. In this study, we provide several lines of evidence that T3S chaperones may impart coherence to effector secretion. In addition, we identified a new early T3S effector in Chlamydia. Aside from the phosphoprotein TARP, a Chlamydia effector that promotes actin re-arrangements, very few factors mediating bacterial entry and early inclusion establishment have been characterized. By defining proteins that associate with the three most abundant T3S chaperones, Slc1, Scc2 and Mcsc in invasive C. trachomatis elementary bodies (EB) by immunoprecipitation coupled with mass spectrometry, we identified Ct875, a new Slc1 client protein and T3S effector, which we renamed TepP (Translocated early phosphoprotein). We provide evidence that T3S effectors form stable complexes with Scl1 in vitro and that Slc1 enhances their T3S-dependent secretion in a heterologous Yersinia T3S system. We demonstrate that TepP is translocated early during bacterial entry into epithelial cells and is phosphorylated at tyrosine residues by host kinases. However, TepP phosphorylation occurs later than TARP, which together with the finding that Slc1 preferentially engages TARP in EBs leads us to postulate that these effectors are translocated into the host cell at different stages during C. trachomatis invasion. TepP co-immunoprecipitated with the scaffolding proteins CrkI-II during infection and Crk was recruited to nascent inclusions. Importantly, C. trachomatis mutants lacking TepP failed to recruit CrkI-II to inclusions, providing genetic confirmation of a direct role for this effector in the recruitment of a host factor. Finally, endocervical epithelial cells infected with a tepP mutant showed altered expression of a subset of genes associated with innate immune responses and lack of C. trachomatis-induced morphological changes. We propose a model wherein TepP acts downstream of TARP to recruit scaffolding proteins at entry sites to initiate and amplify signaling cascades important for the regulation of innate immune responses to Chlamydia.