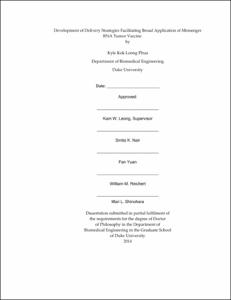 Genetic modification of dendritic cells with plasmid DNA is plagued with low transfection efficiencies because DNA taken up by non-dividing dendritic cells rarely reaches the nucleus. But this difficulty can be overcome by the use of messenger RNA (mRNA), which exerts its biological function in the cytoplasm and obviates the need to enter the nucleus. Since pioneering work of Boczkwoski et al, the ex-vivo application of mRNA-transfected dendritic cells as a vaccine has been evaluated in numerous phase I trials worldwide and is still currently being actively optimized in clinical trials.

However, a major disadvantage of using mRNA-transfected DCs as a vaccine is that it requires patients to undergo at least one 4-hour leukapheresis procedure, followed by separation of the peripheral blood mononuclear cells (PBMCs), from which monocytes are isolated and cultured for a week in a defined medium with cytokines. The resulting DCs are matured after being loaded with mRNA and frozen for storage. Aliquots are subsequently thawed prior to administration to patients. This process of harvesting, culturing and loading DCs is more time- and resource-intensive than Provenge, the first FDA approved cell based tumor vaccine in 2011.Recent evidence has confirmed a lack of broad translation of Provenge due to complexity and cost of treatment. This predicates a similar fate for mRNA-transfected dendritic cell vaccine going forward.

This thesis presents alternative delivery strategies for mRNA mediated tumor vaccination. Through the application of synthetic and natural biomaterials, this thesis demonstrates two viable approaches that reduce or eliminate the need for extensive manipulation and cell culture.

The first approach is the direct in vivo delivery of mRNA encapsulated in nanoparticles for tumor vaccination. A selected number of synthetic gene carriers that have been shown to be effective for other applications are formulated with mRNA into nanoparticles and evaluated for their ability to transfect primary DCs. The best performing formulation is observed to transfect primary murine and human dendritic cells with an efficiency of 60% and 50% (based on %GFP+ cells) respectively. The in vivo transfection efficiency and expression kinetics of this formulation is subsequently evaluated and compared with naked mRNA via various routes of delivery. Following this, a proof-of-concept study is presented for a non-invasive method of mRNA tumor vaccination using intranasally administered mRNA encapsulated in nanoparticles. Results show that intranasally administered mRNA induces tumor immunity only if it is encapsulated in nanoparticles. And anti-tumor immunity is observed in mice intranasally immunized under both prophylactic as well as therapeutic models.

In conclusion, this thesis presents new methods to the delivery of mRNA tumor vaccines that reduce or eliminates the need for extensive cell manipulation and culture. Results presented in this thesis reveal viable research directions towards the development and optimization of mRNA delivery technologies that will address the problem of broad translation of mRNA tumor vaccines in the clinics.