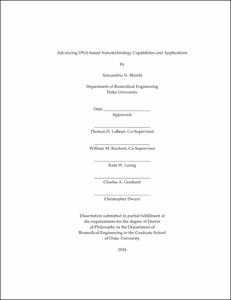 Biological systems have inspired interest in developing artificial molecular self-assembly techniques that imitate nature's ability to harness chemical forces to specifically position atoms within intricate assemblies. Of the biomolecules used to mimic nature's abilities, nucleic acids have gained special attention. Specifically, deoxyribonucleic acid is a stable molecule with a readily accessible code that exhibits predictable and programmable intermolecular interactions. These properties are exploited in the revolutionary structural DNA nanotechnology method known as scaffolded DNA origami. For DNA origami to establish itself as a widely used method for creating self-assembling, complex, functional materials, current limitations need to be overcome and new methods need to be established to move forward with developing structures for diverse applications in many fields. The limitations discussed in this dissertation include 1) pushing the scale of well-formed, fully-addressable origami to two and seven times the size of conventional origami, 2) testing cost-effective staple strand synthesis methods for producing pools of oligos for a specified origami, and 3) engineering mechanical properties using non-natural nucleotides in DNA assemblies. After accomplishing the above, we're able to design complex DNA origami structures that incorporate many of the current developments in the field into a useful material with applicability in wide-ranging fields, namely cell biology and photonics.