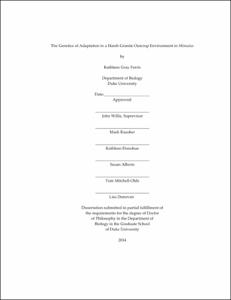 Closely related populations or species often occupy ecologically disparate habitats. Adaptation to new habitats can maintain genetic variation within a species or eventually lead to speciation. Local adaptation to different environments has been repeatedly demonstrated in plants and animals, however the traits and genes that underlie this adaptation are poorly understood. This is because many traits differ between divergent populations and species. One way to solve this problem is to separate a trait from its genetic background through genetic manipulation and look for differences in fitness between genetically manipulated individuals.

My dissertation focuses on investigating the traits and genes that allow two species of Monkey flower, Mimulus laciniatus and Mimulus filicifolius, to survive in a unique habitat. Most closely related Mimulus species, such as M. guttatus, occur in streams and seeps, but M. laciniatus and M. filicifolius have each colonized a harsh granite outcrop environment. Another unique characteristic that both these species share is a lobed leaf shape. Because of the physiological properties of lobed leaves they should be adaptive in a dry, exposed granite outcrop. M. laciniatus also flowers earlier than nearby M. guttatus and is a small flowered self-fertilizing species while M. guttatus has large flowers and is highly outcrossing. Early flowering allows plants to escape the onset of seasonal drought while a self-fertilizing mating system and small flower size is often correlated with the occupation of harsh habitats.

In chapter one I describe a new granite outcrop endemic species of Mimulus, M. filicifolius based on morphological divergence from M. laciniatus. M. filicifolius was previously categorized as M. laciniatus but it is geographically disjunct and its leaves are more finely dissected (Sexton, Ferris, and Schoenig 2013). In the second chapter I explore whether M. filicifolius is genetically divergent and reproductively isolated from M. laciniatus using genetic sequence, microsattelite, and hybrid fertility data from four members of the M. guttatus species complex with highly overlapping geographic ranges: M. guttatus, M. nasutus, M. lacinaitus, and M. filicifolius. In the third chapter I investigate the genetic basis of leaf shape differences in three members of the M. guttatus species complex, M. laciniatus, M. nudatus, and M. guttatus using bulk segregant analysis to map quantitative trait loci. In the fourth and final chapter I examine the genetic basis of flowering time, floral size, and leaf shape divergence between sympatric M. guttatus and M. laciniatus populations in a common garden using quantitative trait locus (QTL) mapping, phenotypic selection on flowering time, flower size, and leaf shape in M. laciniatus x M. guttatus hybrids in a reciprocal transplant experiment in the field, and whether QTL's from my common garden experiment overlap fitness QTL's in the field by genotyping hybrid individuals that survived to flower in the field.