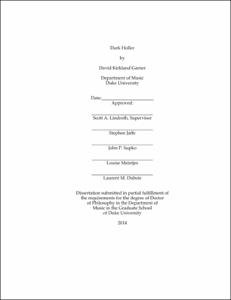 This dissertation is in two parts: a music composition titled "Dark Holler" for large chamber ensemble; and an article on how Cape Breton traditional fiddlers manipulate tempo in performance.

Dark Holler is a 45-minute work in six movements for large chamber ensemble. The piece incorporates a number of styles of American roots music including fiddle tunes, African American fife and drum music from the Mississippi delta, Appalachian ballad singing, and banjo songs. I weave these musical references and quotations with my own musical language and place the source material in new contexts for each movement. In my use of the folk material I am more concerned with the performance of the tunes than with the melodies themselves. The piece gets it's name from a line from the tune used in the final movement: "When I wake I have no rest / every moment seems an hour / all the pain rolls through my breast / I'd rather be in some dark holler."

2. That Driving Sound: Use of Tempo in Traditional Cape Breton Fiddle Performance

In performances of the "Scottish Set," Cape Breton fiddlers create a coherent large-scale structure by executing a continuous tempo acceleration that lasts the length of the March, Strathspey, and Reel set. This command of tempo is extraordinary. Performers use tempo acceleration to transition between tune types and propel the music forward by accelerating by as little as one beat per minute. Considering the music's roots in the dance halls of Cape Breton, where does this unusual practice come from? I look closely at step dancing as registered in the approach to rhythm, pacing, structure, and tempo. The intimate relationship between fiddle and feet yields smooth transitions from one tune type to another in order to facilitate the dance steps. In this paper I demonstrate how fiddlers exaggerate this tempo manipulation in performances where dancing does not occur. Through analysis, I measure tempo fluctuations as they correspond to the progression of tunes to explain the large-scale and continuous tempo acceleration that shapes the exciting performance practice.