The Role of Tcrb Subnuclear Positioning in V(D)J Recombination 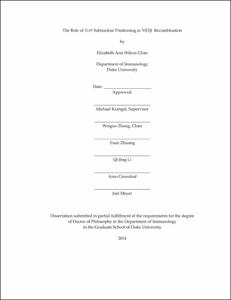 T cells and B cells each express unique antigen receptors used to identify, eliminate, and remember pathogens. These receptors are generated through a process known as V(D)J recombination, in which T cell receptor and B cell receptor gene loci undergo genomic recombination. Interestingly, recombination at certain genes is regulated so that a single in-frame rearrangement is present on only one allele per cell. This phenomenon, termed allelic exclusion, requires two steps. First, recombination can occur only on one allele at a time. In the second step, additional recombination must be prevented. Though the mechanism of the second step is well-understood, the first step remains poorly understood.

Association with repressive subnuclear compartments has been proposed to reduce the recombination efficiency of allelically excluded antigen receptor loci. Of the alleleically excluded loci, <italic>Tcrb</italic> alleles are uniquely regulated during development. Other allelically excluded alleles are positioned at the transcriptionally-repressive nuclear periphery prior to recombination, and relocate to the nuclear interior at the stage in which they recombine. However <italic>Tcrb</italic> alleles remain highly associated with the nuclear periphery during rearrangement. Here we provide evidence that this peripheral subnuclear positioning of <italic>Tcrb</italic> alleles does suppress recombination. We go on to suggest that peripheral localization mediates the first step of allelic exclusion.