Standing Firmly Upon Ground: Transition to Adulthood in Reform-Era China 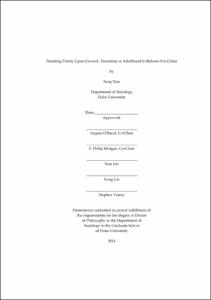 This dissertation aims to examine empirically how the transition to adulthood--the complex process to attain adult independence by completing education, starting the first job, getting married and entering the parenthood--has changed during the Chinese economic reform. The first chapter provides an overall picture of changes in the transition to adulthood in China, and the second and third chapters focus on family and non-family transitions, respectively. The first chapter examines if the transition to adulthood was postponed and de-standardized between 1982 and 2005. Data come from 1982, 1990, 2000 1% census sample and 2005 intercensal survey. The results show a significant postponement of education and employment, but little change in family formation. The transition to adulthood is also de-standardized, especially over the late 20s. The changes are more pronounced among urban residents than rural residents and migrants, and among female migrants than male migrants. The second and third chapters focus on urban China. The second chapter examines how family change is influenced by macro-level institutional contexts. It uses provincial variations in the levels of economic development and interactions with the global markets to differentiate two broad theoretical perspectives on family change: development and diffusion. Data come from respondents born between 1960 and 1979 from the 2008 Chinese General Social Survey and provincial-level economic indicators in 1990 and 2000. Results from latent class analysis and multi-level logistic regressions provide more support for the diffusion perspective. The postponement of family formation varies substantially across provinces. This provincial variation is positively associated with the levels of interactions with world markets (as measured by Foreign Direct Investment performance), but not with socioeconomic development or unemployment rate. The third chapter examines the trend of network-based job search in reform-era China. Data come from a pooled sample of first-time job-seekers from 1998 Labor Market and Social Mobility Survey, 2005 Social Capital Survey of China, and 2008 Chinese General Social Survey. The results suggest a stable increase of network use in finding the first job. The use of strong ties also increases initially, and persists afterwards. These findings are, by and large, consistent with other recent studies of the transition to adulthood reported for other countries. However, the culture of origin and local institutions also make the transition to adulthood of Chinese young adults unique in various respects.