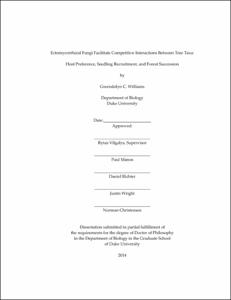 The mycorrhizal mutualism is one of the earliest and most influential of all terrestrial symbioses. As the primary method used by most plants to acquire nutrients from the soil, mycorrhizal fungi help to shape the structure and composition of many ecosystems. Ectomycorrhizal (EM) fungi play an especially significant role because most EM fungi prefer a limited number of host taxa, and EM plant species likewise associate with only a fraction of the available EM fungi. This host preference issue, combined with the high diversity of EM fungi in forest ecosystems, complicates interspecies competition both among fungi and among plants, because these plant and fungal communities interact.

Despite recent attempts at documenting mycorrhizal fungi in the context of ecological succession, many questions remain about the underlying causal relationships among EM fungi, soil conditions, and plant community assembly. The succession of mycorrhizal fungi often mirrors the succession of plants, and ectomycorrhizal (EM) community composition may affect the outcome of competition among trees during succession. In a pine-oak seral system, we tested the ability of <italic>Pinus taeda</italic> and <italic>Quercus alba</italic> seedlings to associate with EM fungi when planted under both conspecific and heterospecific adults. We found that EM communities under pine and oak canopy were distinct regardless of seedling identity, indicating that the fungal associations of adult trees determine which EM species are available in the soil. In addition, pine seedlings planted under oak canopy showed decreased mycorrhization and growth compared to those planted under pine canopy, while oak seedlings showed no negative effects of heterospecific planting. This impaired ability of pine seedlings to associate with the EM community established under oaks may deter pine recruitment and facilitate the late-seral replacement of pines with oaks.

While EM fungal communities correlate with the dominant species of host tree, soil properties do as well, making it difficult to establish causality among these three variables. Soil was collected from oak- and pine-dominated stands and dried to kill off mature mycelium, leaving only the spore bank as a source of inoculum for pine and oak seedlings. EM root tips were collected for molecular identification of fungal species based on ITS barcoding, and soil samples from field and laboratory conditions were analyzed for fungal diversity using 454 sequencing. We found a reduced influence of canopy type and a more pronounced influence of seedling identity when compared to the EM communities on seedlings planted in the field, suggesting that adult trees do alter the availability of fungi by directly promoting the growth of their preferred EM associates.

The availability of EM fungi can also affect seedlings at the interface between EM- an AM-dominated forest. We tested the hypothesis that seedlings of <italic>Dicymbe corymbosa</italic> which recruit outside of monodominant stands have limited access to EM symbionts compared with those which recruit inside <italic>D. corymbosa</italic> stands. EM root tips and rhizosphere soil were collected from seedlings along two transects inside monodominant stands and three transects in the transition zone into mixed forest dominated by AM associates. Seedlings inside monodominant stands yielded both a greater quantity of mycorrhized root tips and a higher diversity of EM species than transition zone seedlings. Of the fungal families commonly found on adult roots, the Boletaceae were notably underrepresented on all seedlings. In the transition zones, high-throughput sequencing of soil also detected a decrease in EM diversity with distance from the parent tree.

Seedlings of <italic>D. corymbosa</italic> may benefit from recruiting within monodominant stands by tapping into common mycorrhizal networks (CMNs) to acquire low-cost nitrogen and, potentially, photosynthates produced by conspecific adults. Leaves of stand adults, stand seedlings, and mixed-forest seedlings were collected for stable isotope analysis to track the transfer of nitrogen and carbon through CMNs. The &delta;<super>13</super>C and &delta;<super>15</super>N results contradicted each other, suggesting that more complicated interactions may be playing out among adults, seedlings, and fungi.