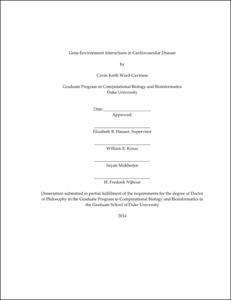 I studied interactions associated with peripheral arterial disease and the number of diseased coronary vessels (an indicator for coronary artery disease burden) using race-stratified cohort study designs. With peripheral arterial disease I observed that variants in both BMP8A and BMP2 showed evidence for interactions in both European-American and African-American cohorts. In BMP8A I uncovered the first genome-wide significant interaction with air pollution associated with cardiovascular disease. BMP2 gene expression is upregulated after exposure to black carbon, a major component of diesel exhaust, and coding variants within this gene showed evidence for interaction. With the number of diseased coronary vessels I observed that variants in PIGR showed significant evidence for involvement in gene-traffic related air pollution interactions. I observed that coding variation within PIGR was associated with coronary artery disease burden in a gene-by-traffic related air pollution interaction model. As PIGR is involved in the immune response it represents a strong candidate gene discovered via an unbiased genome-wide scan.

The use of high dimensional data to study chronic disease is becoming commonplace. In order to properly analyze high-dimensional data without suffering from high false-discovery rate penalties, the data is often summarized in a way that takes advantage of the correlation structure. Two common approaches for this are principal components analysis and canonical correlation analysis. However neither of these approaches are appropriate when one preferentially desires to preserve structure within the data. To address this shortcoming I developed constrained canonical correlation analysis (cCCA). With cCCA one can evaluate the correlation between two high dimensional datasets while preferentially preserving structure in one of the datasets. This has uses when studying multi-variate outcomes such as cardiovascular disease using multi-variate predictors such as air pollution. Additionally cCCA can be used to create endophenotype factors that specifically explain the variation within a high-dimensional set of predictors (such as gene expression or metabolomics data) with respect to potential endophenotypes for cardiovascular disease, such as cholesterol measures.