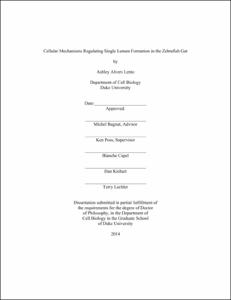 Using light sheet microscopy and genetic approaches we identified a distinct intermediate stage in lumen formation, characterized by two adjacent un-fused lumens. These lumens are separated by cell contacts that contain basolateral adhesion proteins. We observed that lumens arise independently from each other along the length of the gut and do not share a continuous apical surface. Resolution of this intermediate phenotype into a single, continuous lumen requires the remodeling of basolateral contacts between adjacent lumens and subsequent lumen fusion.

Furthermore, we provide insight into the genetic mechanisms regulating lumen formation through the analysis of the Hedgehog pathway. We show that lumen resolution, but not lumen opening, is impaired in <italic>smoothened (smo)</italic> mutants, indicating that fluid-driven lumen enlargement and resolution are two distinct processes. We also show that <italic>smo</italic> mutants exhibit perturbations in the Rab11 trafficking pathway, which led us to demonstrate that Rab11-mediated recycling, but not degradation, is necessary for single lumen formation. Taken together, this work demonstrates that lumen resolution is a distinct genetically-controlled process, requiring cellular rearrangement and lumen fusion events, to create a single, continuous lumen in the zebrafish gut.