A Republic of the Arts: Constructing Nineteenth-Century Art History at the Musée national du Luxembourg, 1871-1914 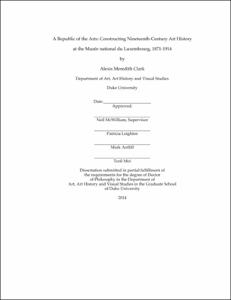 Before the rise of the ubiquitous MOCA (museum of contemporary) there was the Mus&eacutee national du Luxembourg that since its foundation in 1818, served as the first museum anywhere dedicated to contemporary art. Yet the Luxembourg has been left to lurk in the shadows of art history. Best remembered for its mismanagement of the Caillebotte Bequest (1894-1897) that left the French state as the beneficiary of several dozen Impressionist canvases, the Luxembourg has been dismissed as epitomizing official support for an exhausted academicism.

This dissertation has sought to correct these misconceptions of the museum and the Third Republic Fine Arts administration. It provides an institutional history of the museum under the early Third Republic (1871-1914) that reconsiders how different interpretations of republicanism informed its curators' policies and practices. Information culled from archives, official publications, art criticism, and even tourist brochures, has revealed that in the 1890s and especially the 1900s, the museum's curators embraced the politics of solidarism. Applying solidarist principles such as eclecticism, tolerance, and commitment to public education, its curators defended their acquisition of both avant-garde and academic works of art. These principles further spurred curators to trace the spectrum of contemporary painterly styles to French artist tradition. In so doing, the Luxembourg's administrators implicitly upheld republicanism as a characteristically, even classically, French ideology that, in its translation into paint and institutional policies, testified to the nation's continued cultural, artistic, and political supremacy.