Fate and Transformation of Metal-(Oxide) Nanoparticles in Wastewater Treatment 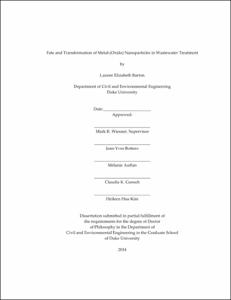 The study and application of materials possessing size dimensions in the nano scale range and, as a result, unique properties have led to the birth of a new field; nanotechnology. Scientists and engineers have discovered and are exploiting the novel physicochemical characteristics of nanoparticles (NPs) to enhance consumer products and technologies in ways superior to their bulk counterparts. Escalating production and use of NPs will unavoidably lead to release and exposure to environmental systems. This introduction of emerging potential contaminant NPs will provide new and interesting challenges for exposure and risk forecasting as well as environmental endurance.

The ultimate goal of this research is to develop a framework that incorporates experimental and computational efforts to assess and better understand the exposure of metal and metal-oxide NPs released to wastewater treatment plants (WWTPs) and further implications on land application units (LAUs) where biosolids can be applied. The foundation of the computational effort is comprised of Monte Carlo mass balance models that account for the unique processes affecting NP fate and transport through the different technical compartments of a WWTP and LAU. Functional assay and bioreactor experiments in environmental media were used to determine parameters capable of describing the critical processes that impact the fate of NPs in wastewater.

The results of this research indicate that a simplified, but still environmentally relevant nano-specific exposure assessment is possible through experimentation to parameterize adapted models. Black box modeling efforts, which have been shown in previous studies, show no disadvantage relative to discretization of technical compartments as long as all key transport and fate mechanisms are considered. The distribution coefficient (_), an experimentally determined, time-dependent parameter, can be used to predict the distribution of NPs between the liquid and solid phase in WWTPs. In addition, this parameter can be utilized a step further for the estimation of the more fundamental, time independent attachment efficiency between the NPs and the solids in wastewater. The NP core, size, and surface coating will influence the value of these parameters in addition to the background particle characteristics as the parameters are specific to the environmental system of study. For the metal and metal-oxide NPs studied, preferential overall association of approximately 90% or greater with the solid phase of wastewater was observed and predicted.

Furthermore, NP transformations including dissolution, redox reactions, and adsorption can potentially impact exposure. For example, experimental results showed that nano-CeO2 is reduced from Ce(IV) to Ce(III) when in contact with wastewater bacteria where Ce2S3 will likely govern the Ce(III) phase in biosolids. From the literature, similar transformations have been observed with Ag and ZnO NPs to Ag2S and ZnS. With respect to TiO2 NPs, studies indicated that due to high insolubility, these NPs would not undergo transformation in WWTPs. The distribution and transformation rate coefficients can then be used in fate models to predict the NP species exposed to aquatic and terrestrial systems and environmentally relevant concentrations released from WWTPs.

Upon completion of the WWTP model, the predicted concentrations of NPs and NP transformation byproducts released in effluent and biosolids were attainable. A simple mass balance model for NP fate in LAUs was then developed to use this output. Results indicate that NP loading on LAUs would be very low but that build up over time to steady state could result in mass concentrations on the order of the typical level for the background metal in soil. Transport processes of plant uptake and leaching were expected to greatly impact the solid phase concentration of the NPs remaining in the LAU, while rainfall did not impart a significant influence upon variation between low and high annual amounts. The significance of this research is the introduction of a method for NP exposure assessment in WWTPs and subsequently in LAUs. This work describes and quantifies the key processes that will impact Ag, TiO2, CeO2 and ZnO NP fate and transport, which can inform future studies, the modeling community and regulatory agencies.