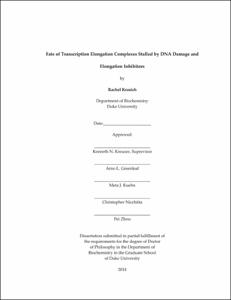 Transcription is the process by which cells translate genetic information stored in DNA into RNA. Transcription is a highly regulated and discontinuous process, and elongation is frequently blocked by DNA damage, pause sites, or intrinsic or external inhibitors. Due to the essential nature of transcription, the cell has numerous ways of dealing with these blockages to transcription, only some of which are understood. We examined the fate of RNA polymerase stalled by DNA-protein crosslinks as well as elongation inhibitors Streptolydigin and Actinomycin D.

We use 5-azacytidine, a cytosine analog that covalently traps cytosine methyltransferases, as a model system for DNA-protein crosslinks (DPCs) in<italic>Escherichia coli</italic>. Our lab previously showed the importance of the tmRNA system for survival during DPC-formation, implying that transcription and translation are blocked by DPCs. For tmRNA to function, the A-site must be cleared, requiring either RNA polymerase to be released first or the nascent RNA chain to be cleaved. Using cell growth assays, we tested mutants related to A-site cleavage factors known to affect transcription initiation, elongation, and termination. Of these mutants, only DksA seemed to have a mild effect, and only at late stages of growth phase. However, western blots for tmRNA tagging showed that <italic>dksA</italic> mutants have increased rather than decreased tmRNA tagging, indicating that another unknown factor is responsible for enabling tmRNA activity.

Since the issue of repair of DPCs remains unresolved, and the repair of DPCs could affect the blocked elongation complex, we used the same cell growth assay to look for potential repair pathways. We found that <italic>dnaK</italic> knockouts were slightly resistant to 5-azacytidine treatment which, coupled with our previous finding that <italic>dnaJ</italic> mutants are hypersensitive to DPCs, implies a potential DnaK-independent role for DnaJ in DPC repair.

The tmRNA western blots also implied that Mfd has termination abilities in wildtype cells, leading us to perform RNAseq analysis on <italic>mfd</italic> knockout and overexpressing cells. We found that global transcription patterns are changed by altering Mfd levels, thus allowing us to propose a novel transcription regulatory role for Mfd.

We extended our elongation inhibitor studies to the eukaryotic inhibitor Actinomycin D and found that transcription-coupled repair pathway is again involved in responding to stalled RNAP. We also screened rifampicin-resistant RNAP mutants for Actinomycin D resistance and found several with the desired phenotype. We thus propose that Actinomycin D inhibition is more complicated than just steric hindrance due to DNA intercalation.