Mystery and the Making of a Christian Historical Consciousness: From Paul to the Second Century 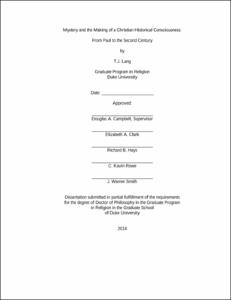 On the most general, theological level this dissertation explores the origins, ensuing articulations, and intellectual implications of what has been characterized as a new Christian "political-historical consciousness" (politisch-historisches Bewusstsein)&mdashthat totalizing reconception of history and ecclesial identity that enabled early Christians to imagine themselves as simultaneously new to the world in terms of revelation and yet also ancient with respect to God's eternal plan. On the more specific and descriptive level, I propose that a key to mapping the early development of this new historical consciousness comes via detailed analysis of a single term introduced by the apostle Paul into the Christian theological lexicon, the noun <italic>mysterion</italic> and the particular understanding of history and revelation that is commonly coupled with it, an understanding I refer to in varying ways as the "once hidden, now revealed" mystery schema. It is, I claim, the historical arrangement of this once hidden/now revealed discourse, and thus the comprehensive division of time into adjacent eras of concealment and revelation, that provided Christians of the first two centuries with the intellectual architecture and concomitant discursive schema that formulated and then further legitimized some of the most original claims of Christian theology. Among these claims are, most notably, ecclesiological propositions regarding the status of the Gentiles among the people of God, hermeneutical propositions related to the revisionary Christian readings of Israel's scriptures, and christological propositions about the unified identity of the newly revealed Christ and the creator God of Israel. Insofar as such propositions were named as mysteries--which is to say, as realities newly revealed but eternally known by the God of Israel--and yet were argued independently of, if not in contradiction of, Torah and other authoritative Jewish writings (see chapters five), or on the basis of Jewish scriptures but without any obvious presence in their "plain sense" (see chapters six and seven), or by appeal to what had become a textual field of authoritative Christian writings (see chapter eight), some sort of new intellectual apparatus was needed to articulate these novel claims. The notion of an eternal mystery previously hidden but recently disclosed to the world, provided just such an apparatus. A detailed lexical analysis of "mystery" in Paul and other early Christian authors should thus provide a helpful constraint for analyzing these larger and less tangible subjects of early Christian thinking about divine revelation and the structure of history.

To be clear, in training my attention on the word and the "once hidden, now revealed" discourse, I am not presuming some sort of idealized concept-in-word equation (or, in this case, a discourse-in-word equation), the error of nomenclaturism as Saussure termed it. Nor am I suggesting that <italic>mysterion</italic> had any sort of fixed meaning, much less a totality of meanings to be smuggled into every occurrence. The linguistic axioms that words and things share no inviolable, one-to-one correspondence, and that sentences (or more complex syntactical strucutres), not individual lexemes, are to be regarded as the fundamental units determining meaning should by now be truisms. My focus on <italic>mysterion</italic> is simply motivated, first, by the observation that when this signifier is used by early Christian authors it most frequently refers to some theological or hermeneutical claim that was previously hidden but is now currently disclosed and thus, second, by the practicality of treating this word as a limiting heuristic for analyzing the more nebulous hidden/revealed discursive formation. This is not to confuse the word for the discourse. Rather it is to use this particular word, which so often appears to be a near technical term for the discourse, as an entry point into it.