If Selma Were Heaven: Economic Transformation and Black Freedom Struggles in the Alabama Black Belt, 1901 - 2000 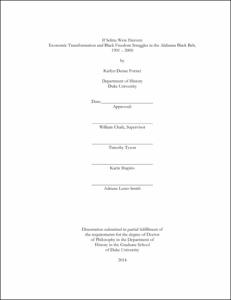 In Selma, Alabama in 1965, local African Americans partnered with civil rights organizations to stage a movement for voting rights. The beating of peaceful black marchers by white state troopers on the Edmund Pettus Bridge that March catapulted the city and black demands for the ballot into the national spotlight. When the Voting Rights Act of 1965 was passed five months later, it cemented Selma as a symbol of voting rights. Since then, Selma has become a triumphal moment in the grand narrative of American democracy and citizenship. However, the years after the voting rights movement failed to bring economic opportunities and justice for black citizens in Selma. At the end of the twentieth century, numbing unemployment, gutted houses, and government transfer payments attested to barriers left unbroken by the passage of the 1965 Voting Rights Act. How, then, did Selma become the site of a nationally-geared campaign for voting rights, and why was the right to vote not enough to bring economic justice for African Americans?

This dissertation is a local study that spans the course of century, one that looks at Selma and Dallas County as a place with a long history shaped by white supremacy and agricultural transformation, as well as local relationships and national developments. It begins in 1901, the year that the newly-passed Alabama constitution took the ballot away from nearly every African American in the state, and ends in 2000, when Selma's residents elected their first black mayor. Using newspapers and magazines, personal papers, organizational records, municipal records, federal publications, and oral histories, it examines how municipal, state, and national politics, as well as enormous economic shifts, intersected with and altered the lives of black and white residents in Dallas County, Alabama.

The multifaceted struggle of African Americans for freedom in Dallas County unfolded within the context of a century-long agricultural revolution in the Black Belt. African Americans' overlapping demands for economic opportunity, self-sufficiency, quality education, and meaningful political representation reflected and responded to local economic shifts from cotton to cattle to industry. The semi-autonomous community black Dallas County residents forged through farmers' organizations, schools, and societies under segregation later helped them mount a frontal challenge to the ramparts of white supremacy. The civil rights movement, however, grew to maturity at exactly the moment when cattle had usurped cotton's reign over the fields, altering the Black Belt's economic and social fabric.

Political rights for African Americans in Dallas County did not solve the postwar economic challenges of vanishing farms and the rise of low-wage industry. Meanwhile, local white officials vigorously fought to maintain political control in the wake of the civil rights movement. Their calculated intransigence delayed the meaningful participation of black residents in the economic and political life of Selma. The rise of the Sunbelt South and globalization further siphoned resources away from the struggling Black Belt. As the federal government retracted and nearby military bases closed in the late 1970s and 1980s, rural areas like Dallas County were left without resources in a new economy that favored high-skilled workers in urban centers. Examining black freedom struggles and economic transformation side-by-side illuminates how voting rights alone did not alter the regional network that concentrated both resources and poverty in an uneven process of development.

The vote brought political power, but it did not bring the economic justice, security, or quality education that made up the other half of African Americans' demands for freedom. By singularly focusing on the securing of voting rights, Selma became a pivotal moment in the story of American democracy, but black Dallas County residents' parallel demands for equal economic opportunities remained long after African Americans had won the vote. The triumphal narrative ignores the economic transformation that fundamentally altered the Black Belt. From cotton to cattle, industry to unemployment checks, black citizens perpetually found themselves on the losing end of economic change. At the end of the century, nearly four decades of federal divestment and globalization had sapped Dallas County of jobs, and the government's presence was felt mainly in the form of disability checks and food assistance. The political rights black Dallas County citizens had shed blood for in 1965 could not alone undo this legacy of economic inequality.