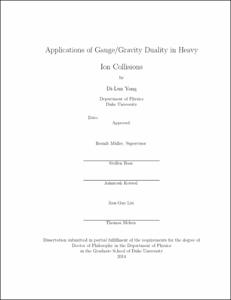 In order to analyze the strongly interacting quark gluon plasma in heavy ion collisions, we study different probes by applying the gauge/gravity duality to facilitate our qualitative understandings on such a non-perturbative system. In this dissertation, we utilize a variety of holographic models to tackle many problems in heavy ion physics including the rapid thermalization, jet quenching, photon production, and anomalous effects led by external electromagnetic fields. We employ the AdS-Vaidya metric to study the gravitational collapse corresponding to the thermalization of a strongly coupled gauge theory, where we compute the approximated thermalization time and stopping distances of light probes in such a non-equilibrium medium. We further generalize the study to the case with a nonzero chemical potential. We find that the non-equilibrium effect is more influential for the probes with smaller energy. In the presence of a finite chemical potential, the decrease of thermalization times for both the medium and the light probes is observed.

The influence from a magnetic field on photoemission is as well investigated in the framework of the D3/D7 system, where the contributions from massive quarks are involved. The enhancement of photon production for photons generated perpendicular to the magnetic field is found. Given that the mass of massive quarks is close to the critical embedding, the meson-photon transition will yield a resonance in the spectrum. We thus evaluate flow coefficient $v_2$ of thermal photons in a 2+1 flavor strongly interacting plasma. The magnetic-field induced photoemission results in large $v_2$ and the resonance from massive quarks gives rise to a mild peak in the spectrum. Moreover, we utilize Sakai-Sugimoto model to analyze the chiral electric separation effect, where an axial current is generated parallel to the applied electric field in the presence of both the vector and axial chemical potentials. Interestingly, the axial conductivity is approximately proportional to the product of the vector chemical potential and the axial chemical potential for arbitrary magnitudes of the chemical potentials.