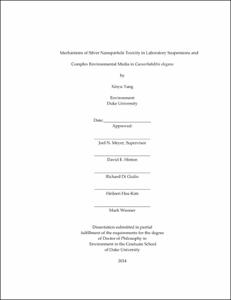 The rapidly increasing use of silver nanoparticles (Ag NPs) in consumer products and medical applications has raised ecological and human health concerns. Significant progress has been made in understanding the toxicity of silver nanoparticles (Ag NPs) under carefully controlled laboratory conditions. The goals of this dissertation were to investigate the mechanism of Ag NP toxicity under both laboratory conditions and environmental backgrounds, using <italic>Caenorhabditis elegans</italic> (<italic>C. elegans</italic>) as a model system. A key question for addressing these concerns is whether Ag NP toxicity is mechanistically unique to nanoparticulate silver or if it is a result of the release of silver ions. Ag NPs are produced in a large variety of monomer sizes and coatings, and since their physicochemical behavior depends on the media composition, it is important to understand how these variables modulate toxicity.

In order to test the hypothesis of a particle-specific effect, multiple techniques were used, including analytical chemistry, pharmacological rescue, and genetic analysis. Results suggested that dissolution was important for all tested Ag NPs and oxidative stress (a particle-specific effect) was important only for some Ag NPs, especially the citrate-coated Ag NPs (CIT-Ag NPs). The hypothesis of the particle-specific effect was further tested by investigating the cellular uptake and damage co-localization upon exposures to CIT-Ag NPs. I found that Ag NPs crossed all layers, including the pharynx, gut, and also embryos through trans-generational transfer. Sites of damage were examined through transmission electron microscopy (TEM), and CIT-Ag NPs showed a more severe and deeper level of damage compared to ionic Ag. In addition, pharmacological inhibitors in parallel with genetic mutants (deficient in both endocytosis and lysosomal function) were used to explore the impact of those pathways on Ag NP uptake and associated toxicity. I found that endocytosis was important for CIT-Ag NP uptake and toxicity. Most intriguingly, one of the lysosomal deficient mutants was much more sensitive than wild type to reproductive inhibition after exposure to CIT-Ag NPs but not ionic Ag, constituting a clear nanoparticle-specific toxic effect.

These laboratory mechanistic studies, however, cannot be directly extrapolated to complicated environmental conditions, including variable amounts of natural organic matter (NOM), different temperatures and salinities, surface sulfidation, etc. My general hypothesis was that complex environmental medium would reduce Ag NP toxicity. In support of this, the environmental conditions present in mesocosms resulted in a loss of toxicity one week after dosing/spiking. In laboratory studies, I found that that increasing temperature and salinity tended to increase Ag NP toxicity, while sulfidation reduced Ag NP toxicity, acting as a &ldquonatural antidote&rdquo. I studied two types of NOM, Suwannee River and Pony Lake fulvic acids (SRFA and PLFA respectively). PLFA rescued toxicity more effectively than SRFA. Therefore, CIT-Ag NP-NOM interactions were explored in depth using PLFA. Using hyperspectral dark field microscopy, I was able to detect the formation of Ag NP-PLFA complexes and the limited tissue uptake of Ag NPs (with and without PLFA). Consistent with the reduced acute toxicity of Ag NPs by PLFA, I also found a rescue effect of PLFA on Ag NP-induced ultrastructural damage.

In conclusion, Ag NP toxicity resulted largely from dissolution and in some cases also from a particle-specific effect. However, Ag NP toxicity was strongly altered by environmental matrices. Continued in depth elucidation of Ag NP behavior, cellular uptake pathways and trafficking, and their interactions with other environmental factors will be invaluable in predicting, designing, and remediating the potential/existing environmental implications of silver-related nanotechnology.