From <italic>Massenlieder<italic> to <italic>Massovaia Pesnia<italic>: Musical Exchanges between Communists and Socialists of Weimar Germany and the Early Soviet Union 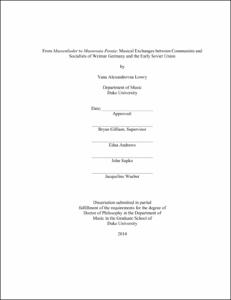 Group songs with direct political messages rose to enormous popularity during the interwar period (1918-1939), particularly in recently-defeated Germany and in the newly-established Soviet Union. This dissertation explores the musical relationship between these two troubled countries and aims to explain the similarities and differences in their approaches to collective singing. The discussion of the very complex and problematic relationship between the German left and the Soviet government sets the framework for the analysis of music. Beginning in late 1920s, as a result of Stalin's abandonment of the international revolutionary cause, the divergences between the policies of the Soviet government and utopian aims of the German communist party can be traced in the musical propaganda of both countries.

There currently exists no scholarly literature providing a wide-ranging view of the German and Soviet musical exchange during the 1920s and 30s. The paucity of comprehensive studies is especially apparent in the English-language scholarship on German and Russian mass music, also known as "music for the people." Even though scholars have produced works devoted to the Soviet and Weimar mass music movements in isolation, they rarely explore the musical connections between the two countries. The lack of scholarship exploring the musical exchanges between the Soviet Union and Germany suggests that scholars have not yet fully examined the influences that the Soviet and German mass songs and their proponents had on each other during the 1920s and 1930s. Exposing these musical influences provides a valuable perspective on the broader differences and similarities between the Soviet and German communist parties. The connections between Soviet and German songs went beyond straightforward translations of propaganda texts from one language to another; the musical and textual transformations--such as word changes, differences in the instrumental arrangements, and distinct approaches to performance--allow for a more nuanced comparison of the philosophical, ideological, and political aspects of Soviet and the German communist movements. In my dissertation, I consider the musical roots of collective singing in Germany as opposed to Russia, evaluate the musical exchanges and borrowings between the early Soviet communists and their counterparts in the Weimar Republic, and explore the effects of musical propaganda on the working classes of both countries. I see my research as a mediation of existing Soviet and Weimar music scholarship.