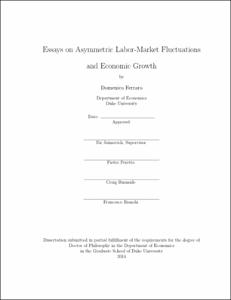 This dissertation consists of three essays. In the first essay, ``The Asymmetric Cyclical Behavior of the U.S. Labor Market,'' I develop a search-and-matching model with endogenous job destruction and heterogeneous workers (in skill/productivity) that accounts for the asymmetry exhibited by cyclical fluctuations in the U.S. labor market and output while also generating (i) realistic volatility in unemployment and job-finding rates and (ii) preserving a downward-sloping Beveridge curve. The model delivers stark predictions for the time series of skill-specific unemployment rates that hold in the Current Population Survey (CPS) micro data once I sort workers by age and education. A general implication of the analysis is that the responsiveness of unemployment to stimulus policies increases substantially during recessions.

In the second essay, ``Volatility and Slow Technology Diffusion: The Case of Information Technologies,'' I address the following question: does business cycle volatility affect the rate at which new technologies are adopted? The answer to this question provides new insights on the link between volatility, total factor productivity (TFP), long-run economic

growth, and cross-country differences in incomes per capita. The paper presents novel cross-country evidence on the link between volatility and time adoption lags. I find a highly statistically and economically significant negative relationship between volatility and the diffusion of three major information and communication technologies (ICT's)---personal computers, internet and cell phones. Countries with more volatile growth rates of real GDP per capita have higher time adoption lags. This negative relationship is rather robust and persists after controlling for cross-country differences in average growth rates of real GDP per capita. I also offer a simple stochastic model of technology adoption in which I derive in closed form the theoretical mapping between time adoption lags, growth, and volatility. In the model as in the data, there is a positive link between volatility and time adoption lags: the interaction of uncertainty with sunk costs of adoption generates a real option value of inaction which delays the adoption of new technologies with the consequent adverse effect on long-run economic growth.

In the third essay, ``Commodity Prices, Long-Run Growth and Fiscal Vulnerability'' (coauthored with Pietro Peretto), we study the short- and long-run effects of commodity price changes and how fiscal policy interacts with the amplification and propagation of external shocks to these prices. To this aim, we develop a Schumpeterian small open economy (SOE) model of endogenous growth that does not exhibit the scale effect. Because of the sterilization of the scale effect, commodity prices have level effects on economic activity but no steady-state growth effects. A general implication of our analysis is that the economy dynamic response to commodity price changes depends both on the structure of the tax code in place and on the policy response necessary to balance the government budget. We show that asset income taxation has negative steady-state growth effects. Furthermore, a positive tax rate on asset income acts as an automatic amplifier of external shocks to commodity prices and makes the effects of these shocks more persistent. Ultimately, our analysis provides insights on how to design welfare-enhancing tax policies for commodity-exporting countries.