Essays on Social Networks in Development 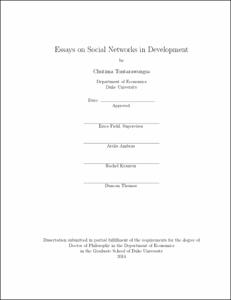 In the first chapter, I study a specific characteristic of social networks, network structure, which is the way in which households are connected in a social network. This chapter looks at how social networks help facilitate cooperation among people in the community, at least, in the context of contributing to public goods. Public goods in this case refer to shared infrastructure in rural villages such as community buildings, water wells, and roads. Provision and maintenance of these public goods relies on contribution of people within the vilage and therefore is essentially a problem of voluntary collective action. In particular, I study whether the level of network connectedness of a household (as measured by network centrality) affects its decisions to contribute to public goods, using data from the Gambia. As an identification strategy, I use an instrumental variable approach that exploits the arguably exogenous variation in village ethnic composition, largely determined by historical accident. The findings suggest that better-connected households contribute more to some public goods. The network position effect is smaller when using a centrality measure that accounts for indirectly connected households. This paper also offers networks as a potential mechanism that explains the long-established relationship between ethnic diversity and public goods.

The second chapter (co-authored with Alessandro Tarozzi and Aprajit Mahajan) looks on a different aspect of social networks. In this chapter, we describe evidence of limited diffusion of bednet acquisition and usage from beneficiaries of an ITN distribution program in rural Orissa, India, to households that did not receive bednets during the intervention. Identification of such network effects relies on the change in ITN adoption among the beneficiaries of a program of bednet distribution that was carried out in a randomly selected subset of 141 study villages. This field experiment was designed to increase the adoption rate of insecticide-treated bed-nets to protect against malaria. The program randomly assigned 141 sample villages into 3 experimental arms - a group in which some households received free distribution of bed-nets, a group in which micro loans for bed-nets were made available, and finally a control group with no intervention. In this paper, we focus on the impact of the intervention on households who lived in these respective groups of villages but did not receive the intervention. Our sample households include those that were exposed to the program via interactions with treated households. Identification is possible by exploiting the exogenous variation from the randomized controlled trials. We find that there is a small positive association between the number of social connections with treated households and their bed nets usage. On average, spillovers were limited. However, we find that bednet usage (but not acquisition) was substantively and significantly associated with some (but not all) measures of social links between non-beneficiaries and beneficiaries. This provides evidence, although limited, of network effects in the adoption of a health-related technology possibly due to diffusion of information and peer imitation.