Neuroimmune Signaling in the Hippocampus: Mechanisms of Risk and Resilience 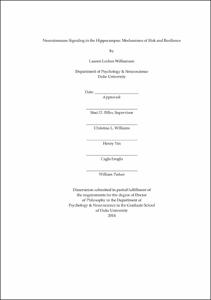 The interactions between the brain and the immune system are extensive and each has a profound influence on the other. The hippocampus is a brain region that is strongly impacted by the immune system, especially considering its large population of microglia, the resident immune cells of the brain. Cytokines and chemokines, the signaling molecules from immune cells, signal within the central nervous system (CNS) as well, and they are critical in hippocampal function. The relationship between the immune system and the hippocampus may underlie its particular vulnerability to diseases and disorders of the nervous system and the periphery. Conversely, immune signaling within the hippocampus is affected by alterations in hippocampal resilience and flexibility, such that increased hippocampal plasticity reduces vulnerability to immune challenges. The balance between risk and resilience in the hippocampus is modulated by immune signaling, especially by microglia.

The hippocampus is vulnerable to immune challenges, disease and injury, but it is simultaneously a region capable of profound plasticity and flexibility. The following dissertation experiments were designed to assess the roles of microglia and their signaling molecules, cytokines and chemokines, during normal hippocampal processes, such as learning and memory and response to immune challenge. The first set of experiments examined the effects of a neonatal bacterial infection in rats on hippocampal-dependent learning and memory as well as neuronal and microglial signaling in adulthood. In the first experiment, neonatally infected rats have impaired memory during fear conditioning following an immune challenge in adulthood. The impairment is caused by the exaggerated expression of the pro-inflammatory cytokine, interleukin (IL)-1&#946;, within the hippocampus during learning. Hippocampal microglia are the primary source of IL-1&#946; and the microglia in neonatally infected rats are "primed" by the infection into adulthood. In the second experiment, neonatally infected rats are more accurate on a Morris Water maze task following minimal training in adulthood, but have significantly impaired memory for a reversal platform location. In addition to improved accuracy, they have lower neural activation as measured by Arc protein expression within the dentate gyrus (DG) of the hippocampus. The next set of experiments assessed the effects of increasing hippocampal plasticity on immune signaling within the hippocampus. Following 7 weeks of environmental enrichment (EE), enriched rats had an attenuated pro-inflammatory response within the hippocampus in response to an in vivo peripheral immune challenge. The reduced immune response was specific to a subset of cytokines and chemokines and occurred only within the hippocampus and not adjacent cortical regions. Enrichment increased glial antigen expression within the DG as well. In another group of enriched rats, an ex vivo stimulation of isolated hippocampal microglia from EE rats demonstrated that the reduced microglial reactivity observed in vivo requires influence of other neural cell types on microglia phenotype, such that microglia within the DG of EE rats are smaller than controls. Taken together, these experiments define cellular and molecular mechanisms of hippocampal vulnerability and resilience as a function of interactions between the brain and the immune system.