Pedogenesis and Anthropedogenesis on the Southern Piedmont 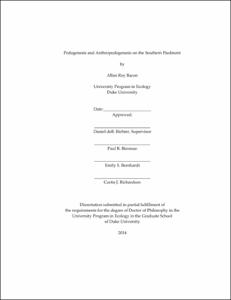 This aim of this dissertation is to investigate "pedogenesis" (soil formation and change over multi-millennial timescales with minimal human impact) and "anthropedogenesis" (centurial and decadal soil formation and change through the Holocene with increased human influence) in the highly weathered, upland soils of the Southern Piedmont physiographic region in the southeastern United States. I start by combining an analysis of the cosmogenic nuclide meteoric beryllium-10 (10Be) with a mass balance analysis of pedogenic 9Be loss to estimate how long the Southern Piedmont Ultisol have been residing at Earth's surface. This coupled analysis indicates that pedogenesis has been operating in these highly weathered Ultisols for much, if not all, of the Quaternary; considerably longer than previously thought. Next, I utilize traditional soil analyses alongside iron stable isotope measurements to investigate how one century of reforestation after agricultural land abandonment impacts the coupled carbon -iron cycle in these ancient subsoils. This project suggests that widespread patterns of anthropogenic land use change in the Southern Piedmont have caused significant subsoil changes that impact carbon storage and the distribution of iron deep below ground. Finally, I analyze over 50 years or repeated soil and forest ecosystem observations from the Calhoun Experimental Forest to investigate the relationship between soil macronutrient contents aboveground forest ecosystem development in the region. These long term observations suggest that decadal patterns of secondary forest growth and decline fundamentally alters the role that soils plays in individual ecosystem nutrient cycles and that the potential for ecosystem nutrient loss is highly nutrient dependent, despite well-established ecological theory.