Sulfide and Accessory Mineral Assemblages in the Sulfur-Poor Regions of the Stillwater Complex, Montana, USA 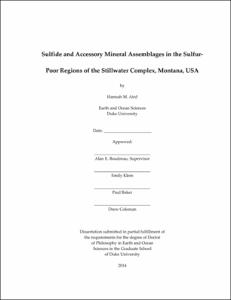 Layered igneous intrusions such as the Stillwater Complex in Montana contain the most economic concentrations of platinum-group elements (PGE) in the world, yet the processes involved in the enrichment of these PGE remain unclear. Some researchers propose that the PGE were enriched into sulfide phases through purely magmatic processes, while others postulate that late-stage, high-temperature fluids caused remobilization of the more soluble elements upwards from the base of the crystal pile. Although much work has been carried out on the economic PGE-enriched ore zone (J-M reef), the silicate mineralogy and the bulk geochemistry of the Complex, the detailed petrographic trends have not been investigated. This dissertation comprises a detailed petrographic study into the assemblages associated with sulfide and other trace minerals throughout the stratigraphy.

Sampling was carried out from both surface outcrops and drill cores over four consecutive field seasons. Polished thin sections were produced which were then examined by petrographic microscope and electron microprobe. In addition, bulk rock analysis was carried out by x-ray fluorescence spectrometry (XRF).

In brief, the sulfide and trace mineral assemblage studies described below reveal a number of interesting observations. An upwards trend from pentlandite-rich to pyrrhotite-rich to chalcopyrite + pyrite-rich assemblages is observed below the reef, and the same trend occurs above the reef with the transition occurring just below the reef, in upper GN-I. Trace element analysis shows that Cu levels are higher above the reef than below it, and that although Zn and Cu contents are correlated below the reef, a restricted range of Zn contents occurs above the reef, while Cu is highly variable. As all `low-temperature' assemblages (those associated with extensive silicate alteration or the presence of greenschist facies minerals such as chlorite, clinozoisite and epidote) were discounted, the majority of sulfide assemblages present were either pristine(multiphase, often globular in shape, with no associated silicate alteration) or high-temperature (multiphase, with high-temperature minerals such as biotite, hornblende, carbonates, etc, and with little associated silicate alteration) in occurrence. Some differences were observed between the hanging-wall and footwall rocks, including the presence of native copper, sphalerite in a calcite-hornblende vein, and high-temperature carbonates in footwall and not hanging-wall rocks. The high-temperature carbonates observed comprise dolomite with exsolved patches of calcite. The textural relationships and Fe-Mn compositions of the Stillwater carbonates are similar to those of mantle carbonates. High-temperature desulfidation is also observed both above and below the reef, in the form of pyrite being converted to magnetite, and chalcopyrite to a Cu-Fe-oxide (delafossite). Both sets of assemblages are associated with little to no silicate alteration. When taken together, the upwards increase in Cu and S, the variable Cu contents above the reef, the native copper, high-temperature carbonates and high-temperature sphalerite-bearing veins below the reef, and the evidence for desulfidation are all most readily explained by the remobilization of selected phases by a high-temperature fluid. This dissertation provides evidence that the fluid present in the latter stages of Stillwater formation had a carbonic as well as a Cl-rich component, and would therefore have been efficient in PGE remobilization.