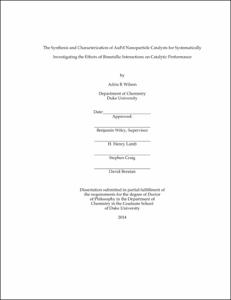 Heterogeneous catalysts are a major energy-saving tool in industrial chemical processes, both by reducing energy input requirements for reactions and also by reducing waste disposal costs. Currently, transition metals and platinum group metals in particular are the industry standard in terms of performance and roustness. Unfortunately, the most valuable catalytic materials of our time are also the most costly and scarce, and as such it is of considerable importance to find ways to optimize catalysts to be as effective as possible and to use a minimum of precious metal. One method of doing this is by constructing bimetallic nanoparticles, which, in addition to lessening the amount of expensive active metal required per gram of catalyst, has been shown in many cases to improve the performance of the catalyst. Our current understanding of the mechanisms by which the introduction of a second element to a first alters its catalytic properties is limited by how well we can characterize the structure of a catalysts, and this has been a considerable challenge. By developing uniform bimetallic nanoparticle catalysts that can be tuned to discretely change either the composition of the particle or the morphology of the particle, we can systematically study how the two metals interact to change the pathway of catalysis. The gold-palladium (AuPd) system is employed, because of its simplicity and ubiquity in the literature, to demonstrate this concept, which may be applied to other combinations of metals. By altering the amounts of Pd precursor, reducing agent, and reaction quenching agent, as well as varying the rate of introduction of Pd ion to the reaction solution, 4.3 nm Au core particles were coated with Pd shells determined to be 0.7 ± 0.2, 1.9 ± 0.3, and 3.8 ± 0.8 atomic monolayers thick. Upon immobilization on silica and calcination and reduction treatments at 300 &deg;C, the particles transformed to alloys containing 10, 20.2, and 28.5% by weight Pd per particle. A variety of spectroscopic and microscopic characterization techniques were used to investigate the bimetallic particles' ability to resist sintering during heating, as well as their shell-thickness dependent propensity to absorb hydrogen into their bulk. Testing the catalysts in the conversion of limonene to cymene demonstrated that the resistance to sintering imparted by the inclusion of Au allowed the 20 and 28.5% AuPd/SiO2 catalysts to achieve higher selectivity to the desired product while minimizing the amount of Pd in the catalyst. The core-shell and alloy particles were compared to one another in the low temperature hydrogenation of ethylene, and it is shown that conversion of ethylene over the 1.9 Pd@Au/SiO2 catalyst is structure sensitive, with its rate of conversion before calcination and reduction measured to be ten times higher than it is afterwards, likely because of its unique ability to store hydrogen near its surface. In general, these reactions demonstrate that the interactions between Au and Pd can be described in terms of experimentally observable effects, which occur as a consequence of the traditionally described geometric and electronic effects under a given set of experimental conditions. Using composite effects such as these, rather than ones that are difficult to isolate, will render our heightened understanding of the effect of structure on catalytic function more directly practicable in developing better catalysts for specific reactions.