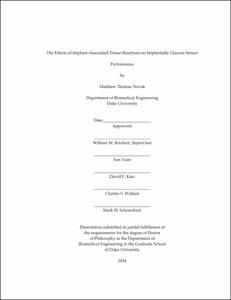 As an increasingly prevalent chronic disease, diabetes represents one of the fastest growing health burdens to both the developed and developing world. In an effort to improve the management and treatment of diabetes, implantable sensors that continuously monitor glucose levels have become popular alternatives to patient-administered finger prick measurements of blood glucose. However, following implantation, the performance of these implants suffers from inaccurate and erratic readings that compromise their useful lives. As a result, implantable glucose sensors remain limited as a platform for the reliable management of diabetes. While the interaction between the sensor and its surrounding tissue has been posited as a culprit for erroneous in vivo sensor performance, there remains little evidence to support that theory.

This dissertation describes the effects that implant-associated tissue reactions have on implantable sensor function. Since tissue response to an implant changes over time, the overall effect of these tissue reactions is broken into two temporal phases: (1) the phase of weeks to months following implantation when a mature foreign body capsule is present around the sensor and (2) the phase of days to weeks immediately following sensor implantation when a provisional matrix of proteins and inflammatory cells envelops the sensor.

Late stage sensor responses to implantation are marked by both an attenuated sensor signal and a significant time lag relative to blood glucose readings. For this later stage of sensor response, a computational model of glucose transport through the interstitial space and foreign body capsule was derived and implemented. Utilizing physiologically relevant parameters, the model was used to mechanistically study how each constituent part of the capsular tissue could affect sensor response with respect to signal attenuation and lag. Each parameter was then analyzed using logarithmic sensitivity analysis to study the effects of different transport variables on both lag and attenuation. Results identified capsule thickness as the strongest determinant of sensor time lag, while subcutaneous vessel density and capsule porosity had the largest effects on attenuation of the sensor signal.

For the phase of early stage tissue response, human whole blood was used as a simple ex vivo experimental system. The impacts of protein accumulation at the sensor surface (biofouling effects) and cellular consumption of glucose in both the biofouling layer and in the bulk (metabolic effects) on sensor response were assessed. Medtronic Minimed SofSensor glucose sensors were incubated in whole blood, plasma diluted whole blood, and cell-free platelet poor plasma (PPP) to analyze the effects of different blood constituents on sensor function. Experimental conditions were then simulated using MATLAB to predict the relative impacts of biofouling and metabolic effects on the observed sensor responses. It was found that the physical barrier to glucose transport presented by protein biofouling did not hinder glucose movement to the sensor surface. Instead, glucose consumption by inflammatory cells was identified as the major culprit for generating poor sensor performance immediately following implantation.

Lastly, a novel, biomimetic construct was designed to mimic the in vivo 3D cellular setting around the sensor for the focused in vitro investigation of early stage effects of implantation on glucose sensor performance. Results with this construct demonstrate similar trends in sensor signal decline to the ex vivo cases described above, suggesting this construct could be used as an in vitro platform for assessing implantable glucose sensor performance.

In total, it may be concluded from this dissertation that instead of sensors "failing" in vivo, as is often reported, that different physiological factors mediate long term sensor function by altering the environment around the implant. For times immediately following implantation, sensor signals are mediated by the presence of inflammatory macrophages adhered on the surface. However, at longer times post-implantation, sensor signals are mediated not by the consumptive capacity of macrophages, but instead by the subcutaneous vessel density surrounding the sensor as well as the porosity and thickness of the foreign body capsule itself. Taken in concert, the results of this dissertation provide a temporal framework for outlining the effects of tissue response on sensor performance, hopefully informing more biocompatible glucose sensor designs in the future.