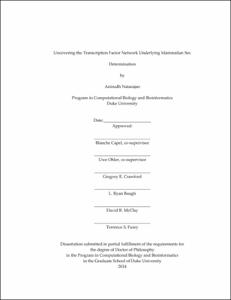 Understanding transcriptional regulation in development and disease is one of the central questions in modern biology. The current working model is that Transcription Factors (TFs) combinatorially bind to specific regions of the genome and drive the expression of groups of genes in a cell-type specific fashion. In organisms with large genomes, particularly mammals, TFs bind to enhancer regions that are often several kilobases away from the genes they regulate, which makes identifying the regulators of gene expression difficult. In order to overcome these obstacles and uncover transcriptional regulatory networks, we used an approach combining expression profiling and genome-wide identification of enhancers followed by motif analysis. Further, we applied these approaches to uncover the TFs important in mammalian sex determination.

Using expression data from a panel of 19 human cell lines we identified genes showing patterns of cell-type specific up-regulation, down-regulation and constitutive expression. We then utilized matched DNase-seq data to assign DNase Hypersensitivity Sites (DHSs) to each gene based on proximity. These DHSs were scanned for matches to motifs and compiled to generate scores reflecting the presence of TF binding sites (TFBSs) in each gene's putative regulatory regions. We used a sparse logistic regression classifier to classify differentially regulated groups of genes. Comparing our approach to proximal promoter regions, we discovered that using sequence features in regions of open chromatin provided significant performance improvement. Crucially, we discovered both known and novel regulators of gene expression in different cell types. For some of these TFs, we found cell-type specific footprints indicating direct binding to their cognate motifs.

The mammalian gonad is an excellent system to study cell fate determination processes and the dynamic regulation orchestrated by TFs in development. At embryonic day (E) 10.5, the bipotential gonad initiates either testis development in XY embryos, or ovarian development in XX embryos. Genetic studies over the last 3 decades have revealed about 30 genes important in this process, but there are still significant gaps in our understanding. Specifically, we do not know the network of TFs and their specific combinations that cause the rapid changes in gene expression observed during gonadal fate commitment. Further, more than half the cases of human sex reversal are as yet unexplained.

To apply the methods we developed to identify regulators of gene expression to the gonad, we took two approaches. First, we carried out a careful dissection of the transcriptional dynamics during gonad differentiation in the critical window between E11.0 and E12.0. We profiled the transcriptome at 6 equally spaced time points and developed a Hidden Markov Model to reveal the cascades of transcription that drive the differentiation of the gonad. Further, we discovered that while the ovary maintains its transcriptional state at this early stage, concurrent up- and down-regulation of hundreds of genes are orchestrated by the testis pathway. Further, we compared two different strains of mice with differential susceptibility to XY male-to-female sex reversal. This analysis revealed that in the C57BL/6J strain, the male pathway is delayed by ~5 hours, likely explaining the increased susceptibility to sex reversal in this strain. Finally, we validated the function of Lmo4, a transcriptional co-factor up-regulated in XY gonads at E11.6 in both strains. RNAi mediated knockdown of Lmo4 in primary gonadal cells led to the down-regulation of male pathway genes including key regulators such as Sox9 and Fgf9.

To find the enhancers in the XY gonad, we conducted DNase-seq in E13.5 XY supporting cells. In addition, we conducted ChIP-seq for H3K27ac, a mark correlated with active enhancer activity. Further, we conducted motif analysis to reveal novel regulators of sex determination. Our work is an important step towards combining expression and chromatin profiling data to assemble transcriptional networks and is applicable to several systems.