Biomarkers of Exposure: Arsenic Concentrations in Keratin in Populations Exposed to Arsenic in Drinking Water 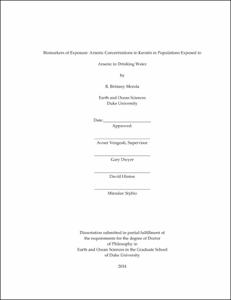 Arsenic (As) exposure via groundwater consumption is a global health problem affecting millions. Monitoring exposure is a key step in understanding and predicating future health outcomes. This thesis explores the relationships between arsenic concentrations in toenails and arsenic in water. Three case studies were investigated, with residents from: North Carolina, USA (n=103); the Rift Valley, Ethiopia (n=60); and the Mekong Delta, Vietnam (n=65). Arsenic concentrations above the WHO's recommended 10ppb limit were found in groundwater from the three research sites.

In the Rift Valley of Ethiopia, 53% of the tested drinking wells (n=34) had As above the WHO's limit. Arsenic concentrations in toenails (n=60) were significantly correlated to As concentrations in groundwater (r=0.72; p<0.001), reflecting the direct exposure of rural communities to As in well water, which is their principle water source. Male minors (<18 years old) were found to have greater nail-As concentrations compared with adults consuming equal amounts of As (p<0.05). Estimated As dose specifically from drinking water sources was also associated with nail concentrations (p<0.01).

In the Mekong Delta of Vietnam (Dong Thap Province), 36 out of the 68 tested wells had As content above the WHO's recommended limit of 10ppb, with levels as high as 981 ppb. Arsenic contents in nails collected from local residents (n=62) were significantly correlated to As in drinking water (r=0.49, p<0.001). Demographic and survey data show that the ratio of As in nail to As in water varies among residents that reflects differential As accumulation in the exposed population. The data show that water filtration and diet, particularly increased consumption of animal protein and dairy and reduced consumption of seafood, were associated with lower ratios of As in nail to As in water and thus could play important roles in mitigating As exposure.

Sixty-one wells were tested from Union County, North Carolina, with 15 out of 61 wells exceeded the WHO's 10 ppb limit. Arsenic values ranged from below the limit of detection (0.07) to 130ppb, with a mean of 11ppb (median=1.5ppb). Nails were collected from county residents (n=103) and were statistically correlated with As-water concentrations (r=0.48, p<0.001).

Integration of the data from the three cases studies across different populations and ethnicities show high correlation between As concentrations in groundwater and As in nails in all the three locations (r(Union County)= 0.48, p<0.001; r(Ethiopia)=0.72 p<0.001; r(Vietnam)=0.49, p<0.001). For As-nail to As-water pairs in which As in water was above 1ppb, these three locations are statistically indistinguishable from one another (r=0.62, p<0.001, n=176). These results support the hypothesis that nails can be used as a biomarker of exposure regardless of geographic or ethnic differences in populations considered. Nutrition (meat, seafood, and milk consumption) rather than gender, ethnicity, or dose is suggested to be the major confounding issue affecting the magnitude of As exposure in the human body.