The Genetics of Primary Open-Angle Glaucoma: A Complex Human Disease 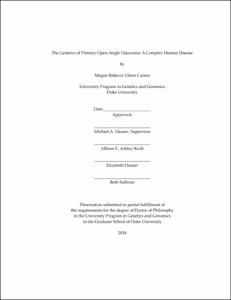 Glaucoma is a chronic ocular neuropathy and a leading cause of blindness worldwide. Primary open-angle glaucoma (POAG) is the most common subtype with an estimated 2 million affected individuals in the Unites States. POAG is a heritable complex trait. Understanding the genetics of POAG may increase our ability to predict disease onset and help elucidate the underlying biological mechanisms responsible for the development of the disease. With this overall goal, three different approaches are presented here.

First, the genetics of an important POAG-associated trait, central corneal thickness (CCT), was investigated using genome-wide single nucleotide polymorphism (SNP) data available from the NEIGHBOR and GLAUGEN consortia to identify novel POAG candidate genes. Twenty previously published CCT-associated SNPs were tested for association with both CCT (N = 1,117) and POAG (N = 6,470). While several of these variants were significantly associated with CCT in our dataset (top SNP = rs12447690, near ZNF469 (beta = -5.08 µm/allele; p = 0.001), none were associated with POAG. A CCT genome-wide association study was conducted. Using a p-value threshold of

1X10-4, 50 candidate SNPs were tested for association with POAG. One SNP, rs7481514, within the NTM gene was significantly associated with POAG in a low tension subset of cases (odds ratio (OR) = 1.28; p = 0.001). Additionally, SNPs in the CNTNAP4 gene showed suggestive evidence of association with POAG (top SNP = rs1428758; OR = 0.84; p = 0.018). A gene expression analysis showed evidence of NTM and CNTNAP4 gene expression in relevant ocular tissues. This study suggests previously reported CCT loci do not increase POAG susceptibility. However, by using a two-step gene mapping approach, the cell adhesion molecules, NTM and CNTNAP4, were identified as potential POAG candidate genes in a subset of cases.

The second study aimed to identify functional alleles within a POAG candidate gene. Previous association studies identified a significant association between POAG and the SIX6 locus (top SNP = rs10483727, OR = 1.32, p = 3.87X10-11). SIX6 plays a role in ocular development and has been associated with the morphology of the optic nerve. Sequencing of the SIX6 coding and regulatory regions in 262 POAG cases and 256 controls identified six nonsynonymous coding variants. Of these six, five were rare (minor allele frequency (MAF) < 0.002) and one, Asn141His (rs33912345), was a common variant that showed a significant association with POAG (OR = 1.27, p = 4.2X10-10) in the NEIGHBOR/GLAUGEN dataset. These variants were tested in an in vivo zebrafish complementation assay to evaluate ocular metrics. Five of the six alleles had a functional effect on the protein. These five variants, found primarily in POAG cases, were hypomorphic or null, while a sixth variant, found only in controls, was benign. One variant in the SIX6 enhancer increased expression of the SIX6 gene and disrupted its regulation. Using optical coherence tomography, the retinal thickness of POAG with and without the common SIX6 risk allele, Asn141His (rs33912345), was measured. Patients who are homozygous for the SIX6 risk allele (His141) have a statistically thinner retinal nerve fiber layer than patients homozygous for the SIX6 non-risk allele (Asn141). These results in combination with previous SIX6 work, leads us to hypothesize that SIX6 risk variants disrupt the development of the neural retina and result in a reduced number of retinal ganglion cells generated during development, thereby increasing the risk of glaucoma-associated vision loss later in life.

Next, the transcriptional landscape of three POAG-related tissues; the trabecular meshwork, the cornea, and the ciliary body; were evaluated using an RNA sequencing (RNA-seq) approach. Tissues were selected from two fetal and four adult human donor samples with no known history of ocular disease. Deep RNA-seq was performed, and the total number of paired reads per sample ranged from 32,137,380 to 59,784,117. A descriptive analysis was conducted and included the identification of the top most expressed genes in each tissue and the distribution of gene expression values. Additionally, gene expression of selected POAG candidate genes (CDKN2B, CDKN2A, CDKN2B-AS, SIX6, SRBD1, ATOH, CAV1, CAV2, ELOVL5, and TMCO1) was evaluated. Most of these genes showed high expression values in the trabecular meshwork and cornea. ATOH was only found to be expressed in the fetal TM and, interestingly, SIX6 was shown to be highly expressed in the adult and fetal ciliary body. CDKN2B-AS was not found to be expressed in any of the tissues evaluated. Finally, the RNA-seq data was used to identify potential novel isoforms of these candidate genes. Using a stringent threshold, five novel isoforms were identified in CDKN2B, SRBD1, and SIX6. The data generated as part of this study can be used to develop novel hypotheses, guide future work, and is broadly applicable for ocular research because the tissues included in this analysis are essential for normal vision and play important roles in ocular diseases.

In this dissertation, three different approaches (assessment of a quantitative risk factor, candidate gene functional analysis, and the assessment of the transcriptional landscape of relevant ocular tissues) were used to study the common blinding disorder, primary open-angle glaucoma. Continued research in this field is essential. There is a need for increased functional follow-up of genetic association studies in order to identify true causal susceptibility genes and improve our understanding of POAG biology. Additionally, researchers should focus on building and implementing accurate prediction models to increase POAG diagnosis rates and preemptive treatment.