Feedback-Mediated Dynamics in the Kidney: Mathematical Modeling and Stochastic Analysis 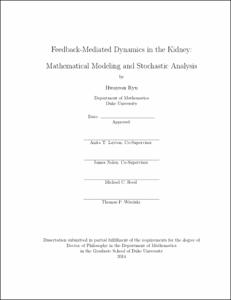 One of the key mechanisms that mediate renal autoregulation is the tubuloglomerular feedback (TGF) system, which is a negative feedback loop in the kidney that balances glomerular filtration with tubular reabsorptive capacity. In this dissertation, we develop several mathematical models of the TGF system to study TGF-mediated model dynamics.

First, we develop a mathematical model of compliant thick ascending limb (TAL) of a short loop of Henle in the rat kidney, called TAL model, to investigate the effects of spatial inhomogeneous properties in TAL on TGF-mediated dynamics. We derive a characteristic equation that corresponds to a linearized TAL model, and conduct a bifurcation analysis by finding roots of that equation. Results of the bifurcation analysis are also validated via numerical simulations of the full model equations.

We then extend the TAL model to explicitly represent an entire short-looped nephron including the descending segments and having compliant tubular walls, developing a short-looped nephron model. A bifurcation analysis for the TGF loop-model equations is similarly performed by computing parameter boundaries, as functions of TGF gain and delay, that separate differing model behaviors. We also use the loop model to better understand the effects of transient as well as sustained flow perturbations on the TGF system and on distal NaCl delivery.

To understand the impacts of internephron coupling on TGF dynamics, we further develop a mathematical model of a coupled-TGF system that includes any finite number of nephrons coupled through their TGF systems, coupled-nephron model. Each model nephron represents a short loop of Henle having compliant tubular walls, based on the short-looped nephron model, and is assumed to interact with nearby nephrons through electrotonic signaling along the pre-glomerular vasculature. The characteristic equation is obtained via linearization of the loop-model equations as in TAL model. To better understand the impacts of parameter variability on TGF-mediated dynamics, we consider special cases where the relation between TGF delays and gains among two coupled nephrons is specifically chosen. By solving the characteristic equation, we determine parameter regions that correspond to qualitatively differing model behaviors.

TGF delays play an essential role in determining qualitatively and quantitatively different TGF-mediated dynamic behaviors. In particular, when noise arising from external sources of system is introduced, the dynamics may become significantly rich and complex, revealing a variety of model behaviors owing to the interaction with delays. In our next study, we consider the effect of the interactions between time delays and noise, by developing a stochastic model. We begin with a simple time-delayed transport equation to represent the dynamics of chloride concentration in the rigid-TAL fluid. Guided by a proof for the existence and uniqueness of the steady-state solution to the deterministic Dirichlet problem, obtained via bifurcation analysis and the contraction mapping theorem, an analogous proof for stochastic system with random boundary conditions is presented. Finally we conduct multiscale analysis to study the effect of the noise, specifically when the system is in subcritical region, but close enough to the critical delay. To analyze the solution behaviors in long time scales, reduced equations for the amplitude of solutions are derived using multiscale method.