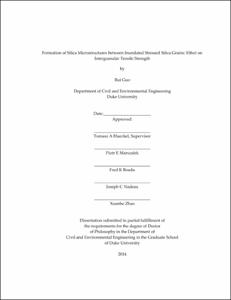 Laboratory tests on microscale are reported in which amorphous silica grains were compressed in a liquid environment, namely in solutions with different silica ion concentrations for up to four weeks. Such an arrangement represents an idealized representation of two sand grains. The grain surfaces and asperities were examined in Scanning Electron Microscopy (SEM) and Atomic Force Microscopy (AFM) for fractures, silica polymer growth, and polymer strength. Single chains of silica polymers are found to have a failure pulling force of 330 - 450 nN.

A chain of observations are reported for the first time, using Pneumatic Grain Indenter and Grain Indenter-Puller apparatuses, confirming a long-existing hypothesis that a stressed contact with microcracks generates dissolved silica in the contact (asperity) vicinity, which eventually polymerizes, forming a structure between the grains on a timescale in the order of weeks. Such structure exhibits intergranular tensile force of 1 - 1.5 mN when aged in solutions containing silica ion concentrations of 200- to 500 ppm. Stress appears to accelerate the generation of silica polymers around stressed contact regions, so does mica-silica contacts. The magnitude of intergranular tensile force is 2 to 3 times greater than that of water capillary effect between grains.