Mechanism of Cyclin D1 regulation by progestins in breast cancer 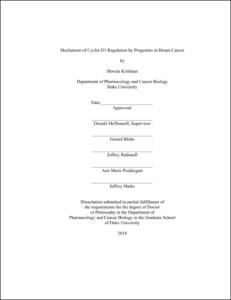 The majority of breast tumors express the estrogen receptor (ER), and more than half of these cancers also express the progesterone receptor (PR). While the actions of ER on breast cancer pathogenesis are well understood, those of PR are still unclear. The Women's Health Initiative trial in 2002 brought into focus the alarming result that women receiving both estrogen and progestins as hormone replacement therapy are at greater risk for breast cancer than women receiving estrogen alone. Thus, there is considerable interest in defining the mechanisms that underlie the pharmacological actions of progestins in the normal and malignant breast.

Progestins facilitate cell cycle progression through multiple mechanisms, one of which is the induction of phosphorylation of the tumor suppressor retinoblastoma (Rb) protein. Stimulation by growth factors induces the transcription of Cyclin D1 which in turn activates the cyclin dependent kinases (CDKs). The Cyclin D1- Cdk4/6 complex phosphorylates the Rb protein, leading to the release of E2F1, which then binds and activates other target genes, leading to G1-S transition of the cell cycle. Given the reported action of PR to activate MAPK signaling, we initially thought that the progestin-induced Rb phosphorylation was mediated by this pathway. However, we turned to an alternate hypothesis based on our data using MEK inhibitors demonstrating that this was not the case.

Given the primacy of Cyclin D1 in cell cycle control, we then turned our attention to defining the mechanism by which Cyclin D1 expression is regulated by PR. Interestingly, it was determined that progestin mediated up- regulation of Cyclin D1 is rapid, peaking at 6hrs post hormone addition followed by a decrease in expression reaching a nadir at 18hrs. Unexpectedly, we found that contrary to what has been published before, the induction of Cyclin D1 mRNA expression was a primary transcriptional event and we have demonstrated the specific interaction of PR with PREs (progesterone response elements) located on this gene. We have further determined that the half-life of Cyclin D1 mRNA is decreased significantly by progestin addition explaining how the levels of this mRNA following the addition of hormone are quickly attenuated. Thus, when taken together, our data suggest that progestins exert both positive and negative effects on Cyclin D1 mRNA, the uncoupling of which is likely to impact the pathogenesis of breast cancer

Thus, collectively these data provide us with a better picture of the poorly understood actions of PR on breast cancer proliferation and tumorigenesis. We believe that further investigation of the studies developed in this thesis will lead to novel and better-targeted approaches to the use of PR as a therapeutic target in the clinic.