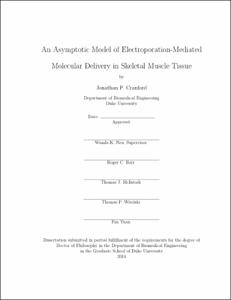 Electroporation is a biological cell's natural reaction to strong electric fields, where transient pores are created in the cell membrane. While electroporation holds promise of being a safe and effective tool for enhancing molecular delivery in numerous medical applications, it remains largely confined to preclinical research and clinical trials due to an incomplete understanding of the exact mechanisms involved. Muscle fibers are an important delivery target, but traditional theoretical studies of electroporation ignore the individual fiber geometry, making it impossible to study the unique transverse and longitudinal effects from the pulse stimulus. In these long, thin muscle fibers, the total reaction of the fiber to the electric field is due to fundamentally different effects from the constituent longitudinal and transverse components of the electric field generated by the pulse stimulus. While effects from the transverse component have been studied to some degree, the effects from the longitudinal component have not been considered.

This study develops a model of electroporation and delivery of small molecules in muscle tissue that includes effects from both the transverse and longitudinal components of the electric field. First, an asymptotic model of electric potential in an individual muscle fiber is derived that separates the full 3D boundary value problem into transverse and a longitudinal problems. The transverse and longitudinal problems each have their own respective source functions: the new "transverse activating function" and the well known longitudinal activating function (AF). This separation enhances analysis of the different effects from these two AFs and drastically reduces computational intensity. Electroporation is added to the asymptotic fiber model, and simplified two-compartment mass transport equations are derived from the full 3D conservation of mass equations to allow simulation of molecular uptake due to diffusion and the electric field. Special emphasis is placed on choosing model geometry, electrical, and pulsing parameters that are in accordance with experiments that study electroporation-mediated delivery of small molecules in the skeletal muscle of small mammals.

Overall, percent increase in total tissue uptake from the longitudinal AF is on the order of experimental variability, and this study corroborates previous theoretical models that neglect the effects from the longitudinal AF. However, previous models neglect the longitudinal AF without explanation, while the asymptotic fiber model is able to detail the mechanisms involved. Mechanisms revealed by the model offer insight into interpreting experimental results and increasing efficiency of delivery protocols. The model also rigorously derives a new transverse AF based on individual fiber geometry, which affects the spatial distribution of uptake in tissue differently than predicting uptake based on the magnitude of the electric field, as used in many published models. Results of this study are strictly valid for transport of small molecules through small non-growing pores. For gene therapy applications the model must be extended to transport of large DNA molecules through large pores, which may alter the importance of the longitudinal AF. In broader terms, the asymptotic model also provides a new, computationally efficient tool that may be used in studying the effect of transverse and longitudinal components of the field for other types of membrane dynamics in muscle and nerves.