Travel Networks and US City Prosperity 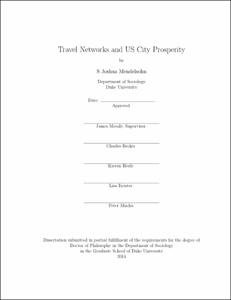 Does the movement of people between cities influence the economic prosperity of those cities? I examine highway and air travel network data for continental US cities between 2000 and 2010 to argue that it might. My argument consists of three analyses. The first uses network ARMA modeling to show that there is an association between the US travel network and city median income. However, the explanatory contribution of the network varies from 2\% to 16\%, depending on the model specified. The second uses two-stage dyadic linear modeling to establish directionality, showing that the association is less likely to reflect the influence of prosperity on travel networks than vis versa. However, these models explain only 17\% of the variation in traffic volumes. The third addresses causality. It uses a natural experiment design to demonstrate that natural disasters in distant countries correspond to diminished city median incomes for the US cities with connections to them, but not for a propensity-matched sample of unconnected cities. However, the finding are not statistically significant at the .05 level (p= .09), and the estimated size of the effect is implausibly large. Together, the analyses examine the association, directionality and causation, raising the possibility that the movement of people between networks influences the prosperity of those cities.