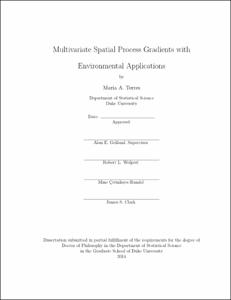 Previous papers have elaborated formal gradient analysis for spatial processes, focusing on the distribution theory for directional derivatives associated with a response variable assumed to follow a Gaussian process model. In the current work, these ideas are extended to additionally accommodate one or more continuous covariate(s) whose directional derivatives are of interest and to relate the behavior of the directional derivatives of the response surface to those of the covariate surface(s). It is of interest to assess whether, in some sense, the gradients of the response follow those of the explanatory variable(s), thereby gaining insight into the local relationships between the variables. The joint Gaussian structure of the spatial random effects and associated directional derivatives allows for explicit distribution theory and, hence, kriging across the spatial region using multivariate normal theory. The gradient analysis is illustrated for bivariate and multivariate spatial models, non-Gaussian responses such as presence-absence and point patterns, and outlined for several additional spatial modeling frameworks that commonly arise in the literature. Working within a hierarchical modeling framework, posterior samples enable all gradient analyses to occur as post model fitting procedures.