Neuronal Survival of the Fittest: The Importance of Aerobic Capacity in Exercise-Induced Neurogenesis and Cognition 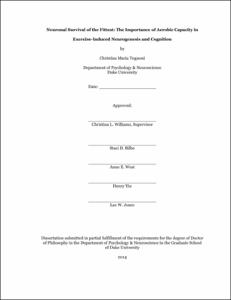 It is commonly accepted that aerobic exercise increases hippocampal neurogenesis, learning and memory, as well as stress resiliency. However, human populations are widely variable in their inherent aerobic fitness as well as their capacity to show increased aerobic fitness following a period of regimented exercise. It is unclear whether these inherent or acquired components of aerobic fitness play a role in neurocognition. To isolate the potential role of inherent aerobic fitness, we exploited a rat model of high (HCR) and low (LCR) inherent aerobic capacity for running. At a baseline, HCR rats have two- to three-fold higher aerobic capacity than LCR rats. We found that HCR rats also had two- to three- fold more young neurons in the hippocampus than LCR rats as well as rats from the heterogeneous founder population. We then asked whether this enhanced neurogenesis translates to enhanced hippocampal cognition, as is typically seen in exercise-trained animals. Compared to LCR rats, HCR rats performed with high accuracy on tasks designed to test neurogenesis-dependent pattern separation ability by examining investigatory behavior between very similar objects or locations. To investigate whether an aerobic response to exercise is required for exercise-induced changes in neurogenesis and cognition, we utilized a rat model of high (HRT) and low (LRT) aerobic response to treadmill training. At a baseline, HRT and LRT rats have comparable aerobic capacity as measured by a standard treadmill fit test, yet after a standardized training regimen, HRT but not LRT rats robustly increase their aerobic capacity for running. We found that sedentary LRT and HRT rats had equivalent levels of hippocampal neurogenesis, but only HRT rats had an elevation in the number of young neurons in the hippocampus following training, which was positively correlated with accuracy on pattern separation tasks. Taken together, these data suggest that a significant elevation in aerobic capacity is necessary for exercise-induced hippocampal neurogenesis and hippocampal neurogenesis-dependent learning and memory. To investigate the potential for high aerobic capacity to be neuroprotective, doxorubicin chemotherapy was administered to LCR and HCR rats. While doxorubicin induces a progressive decrease in aerobic capacity as well as neurogenesis, HCR rats remain at higher levels on those measures compared to even saline-treated LCR rats. HCR and LCR rats that received exercise training throughout doxorubicin treatment demonstrated positive effects of exercise on aerobic capacity and neurogenesis, regardless of inherent aerobic capacity. Overall, these findings demonstrate that inherent and acquired components of aerobic fitness play a crucial role not only in the cardiorespiratory system but also the fitness of the brain.