Chemical and Physical Analysis of Melanin in Complex Biological Matrices 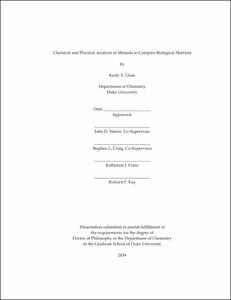 Melanin is a ubiquitous biological pigment found in bacteria, fungi, plants, and animals. It has a diverse range of ecological and biochemical functions including display, evasion, photoprotection, detoxification, and metal scavenging. Two forms of melanin produced from different molecular precursors are present in nature - eumelanin (dark brown-black in color) and pheomelanin (orange-red in color). Both eumelanin and pheomelanin are complex highly cross-linked biopolymers that are found intertwined with proteins, lipids, and metal ions in nature.

Melanin has unique chemical signatures that are commonly used to characterize and compare the pigment of modern organisms. We applied these chemical approaches to the study of fossil pigmentation. Analysis of the black pigmentation of two > 160 million year old (Mya) Jurassic cephalopod ink sacs provided the first conclusive evidence for eumelanin in the fossil record. The preserved fossil eumelanin was then compared to modern cephalopod eumelanin from Sepia officinalis. Using these chemical approaches we found that fossil eumelanin was chemically and morphologically identical to S. officinalis eumelanin.

Although there is mounting chemical evidence for the presence and preservation of melanin in the fossil record, there is very little data constraining its long-term survival. We applied the analytical approaches designed to study fossil melanins and techniques used to study fossil sediments to compare the fossil inks from three deposits of similar age and lithology, but different maturation histories. Specifically, two ~ 180 Mya fossil ink sacs from a site that has entered the oil window in Holzmaden, Germany were compared to the previously analyzed fossil inks from two less mature sites in southern England. The chemistry of eumelanin was shown to alter at the onset of the oil window regardless of the age of the specimen. The decrease in surviving melanin was accompanied by an increase in the relative abundance of organic macromolecular material (kerogen), but no consistent change in melanin morphology.