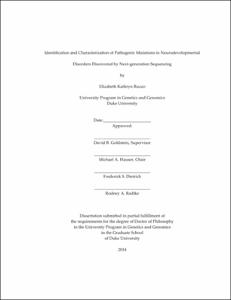 We sought to identify the genetic underpinnings of a variety of neurodevelopmental disorders, with a particular emphasis on the epilepsies, by employing next&ndash;generation sequencing to thoroughly interrogate genetic variation in the human genome/exome. First, we investigated four families presenting with a seemingly identical and previously undescribed neurodevelopmental disorder characterized by congenital microcephaly, intellectual disability, progressive cerebral atrophy, and intractable seizures. These families all exhibited an apparent autosomal recessive pattern of inheritance. Second, we investigated a heterogeneous cohort of &sim;60 undiagnosed patients, the majority of whom suffered from severe neurodevelopmental disorders with a suspected genetic etiology. Third, we investigated 264 patients with epileptic encephalopathies &mdash; severe childhood epilepsy disorders &mdash; looking specifically at infantile spasms and Lennox&ndash;Gastaut syndrome. Finally, we investigated &sim;40 large multiplex epilepsy families with complex phenotypic constellations and unclear modes of inheritance. The studied neurodevelopmental disorders exhibited a range of genetic complexity, from clear Mendelian disorders to common complex disorders, resulting in varying degrees of success in the identification of clearly causal genetic variants.

In the first project, we successfully identified the disease&ndash;causing gene. We show that recessive mutations in <italic>ASNS </italic> (encoding asparagine synthetase) are responsible for this previously undescribed neurodevelopmental disorder. We also characterized the causal mutations <italic>in vitro</italic> and studied Asns&ndash;deficient mice that mimicked aspects of the patient phenotype. This work describes ASNS deficiency as a novel neurodevelopmental disorder, identifies three distinct causal mutations in the ASNS gene, and indicates that asparagine synthesis is essential for the proper development and function of the brain.

In the second project, we exome sequenced 62 undiagnosed patients and their unaffected biological parents (trios). By analyzing all identified variants that were annotated as putatively functional and observed as a novel genotype in the probands (not observed in the unaffected parents or controls), we obtained a genetic diagnosis for 32% (20/62) of these patients. Additionally, we identify strong candidate variants in 31% (13/42) of the undiagnosed cases. We also present additional analysis methods for moving beyond traditional screens, e.g., considering only securely implicated genes, or subjecting qualifying variants from any gene to two unique analysis approaches. This work adds to the growing evidence for the utility of diagnostic exome sequencing, increases patient sizes for rare neurodevelopmental disorders (enabling more detailed analyses of the phenotypic spectrum), and proposes novel analysis approaches which will likely become beneficial as the number of sequenced undiagnosed patients grows.

Finally, we investigated multiplex epilepsy families to uncover novel epilepsy susceptibility factors. Candidate variants emerging from sequencing within discovery families were further assessed by cosegregation testing, variant association testing in a case&ndash;control cohort, and gene&ndash;based resequencing in a cohort of additional multiplex epilepsy families. Despite employing multiple approaches, we did not identify any clear genetic associations with epilepsy. This work has, however, identified a set of candidates that may include real risk factors for epilepsy; the most promising of these is the <italic>MYCBP2</italic> gene. This work emphasizes the extremely high locus and allelic heterogeneity of the epilepsies and demonstrates that very large sample sizes are needed to uncover novel genetic risk factors.

Collectively, this body of work has securely implicated three novel neurodevelopmental disease genes that inform the underlying pathology of these disorders. Furthermore, in the final three studies, this work has highlighted additional candidate variants and genes that may ultimately be validated as disease&ndash;causing as sample sizes increase.