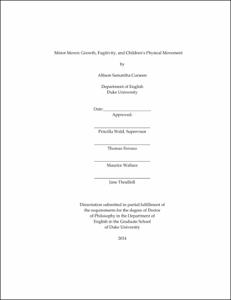 From tendencies to reduce the Underground Railroad to the imperative "follow the north star" to the iconic images of Ruby Bridges' 1960 "step forward" on the stairs of William Frantz Elementary School, America prefers to picture freedom as an upwardly mobile development. This preoccupation with the subtractive and linear force of development makes it hard to hear the palpable steps of so many truant children marching in the Movement and renders illegible the nonlinear movements of minors in the Underground. Yet a black fugitive hugging a tree, a white boy walking alone in a field, or even pieces of a discarded raft floating downstream like remnants of child's play are constitutive gestures of the Underground's networks of care and escape. Responding to 19th-century Americanists and cultural studies scholars' important illumination of the child as central to national narratives of development and freedom, "Minor Moves" reads major literary narratives not for the child and development but for the fugitive trace of minor and growth.

In four chapters, I trace the physical gestures of Nathaniel Hawthorne's Pearl, Harriet Beecher Stowe's Topsy, Harriet Wilson's Frado, and Mark Twain's Huck against the historical backdrop of the Fugitive Slave Act and the passing of the first compulsory education bills that made truancy illegal. I ask how, within a discourse of independence that fails to imagine any serious movements in the minor, we might understand the depictions of moving children as interrupting a U.S. preoccupation with normative development and recognize in them the emergence of an alternative imaginary. To attend to the movement of the minor is to attend to what the discursive order of a development-centered imaginary deems inconsequential and what its grammar can render only as mistakes. Engaging the insights of performance studies, I regard what these narratives depict as childish missteps (Topsy's spins, Frado's climbing the roof) as dances that trouble the narrative's discursive order. At the same time, drawing upon the observations of black studies and literary theory, I take note of the pressure these "minor moves" put on the literal grammar of the text (Stowe's run-on sentences and Hawthorne's shaky subject-verb agreements). I regard these ungrammatical moves as poetic ruptures from which emerges an alternative and prior force of the imaginary at work in these narratives--a force I call "growth."

Reading these "minor moves" holds open the possibility of thinking about a generative association between blackness and childishness, one that neither supports racist ideas of biological inferiority nor mandates in the name of political uplift the subsequent repudiation of childishness. I argue that recognizing the fugitive force of growth indicated in the interplay between the conceptual and grammatical disjunctures of these minor moves opens a deeper understanding of agency and dependency that exceeds notions of arrested development and social death. For once we interrupt the desire to picture development (which is to say the desire to picture), dependency is no longer a state (of social death or arrested development) of what does not belong, but rather it is what Édouard Glissant might have called a "departure" (from "be[ing] a single being"). Topsy's hard-to-see pick-pocketing and Pearl's running amok with brown men in the market are not moves out of dependency but indeed social turns (a dance) by way of dependency. Dependent, moving and ungrammatical, the growth evidenced in these childish ruptures enables different stories about slavery, freedom, and childishness--ones that do not necessitate a repudiation of childishness in the name of freedom, but recognize in such minor moves a fugitive way out.