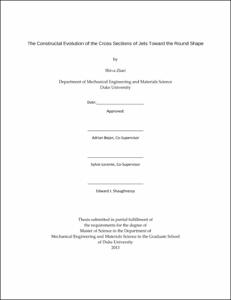 This thesis reports a theoretical and experimental study of laminar and turbulent jet flows issuing from a slender rectangular nozzle. According to constructal law of design and evolution in nature, all flow systems have a tendency to evolve into configurations that facilitate flow access over time. Therefore this law predicts that when a jet initially has a flat cross-section, further downstream it would evolve toward round cross-sections for the purpose of enhancing the transfer of momentum (movement) perpendicular to the jet, i.e. to enhance mixing. The first part of the study consists of numerical simulations conducted in range of Re = 10, 20 and 30 for laminar jet flow, and Re = 500, 1000, 2000, 5000 and 10000 for turbulent jet flow, where Re is the Reynolds number based on nozzle spacing and velocity. In the second part, the phenomenon is studied based on scale analysis. The chief conclusions of this part is that the prediction of the transition from flat to round cross-section is in agreement with the results produced by numerical experiments. The experimental observations of jet flows are in accordance with the constructal law.