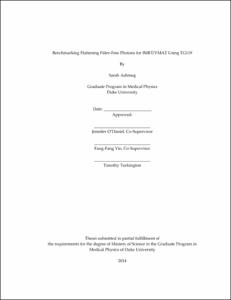 Since the publication of TG119 in 2009, new techniques have emerged in the field of radiation therapy including VMAT (Volumetric Arc Therapy) and the FFF (Flattening Filter Free) mode in Varian linear accelerators. Our goal in this work is to verify the feasibility of using TG119 to test the commissioning of VMAT and FFF systems and to set a benchmark for other institutions to use.

We created 48 plans of the five sites given in TG119 in addition to a "real" HN case. For each site, we planned IMRT and VMAT using 6MV and 10MV, FF and FFF modes (6*2*2*2 = 48 plans). All our plans were created on the Eclipse treatment planning system (Varian Medical Systems, Palo Alto, CA) and delivered on three beam-matched TrueBeam linear accelerators (Varian) at Duke University Medical Center.

Measurements were taken using ion chamber, film, and a pseudo-3D diode array (Delta4), and compared to the planned doses. Confidence limits were determined using the approach of TG119 (CL = average mean deviation + 1.96 * standard deviation). We used the student's paired t-test to determine any statistically significant differences between IMRT and VMAT, FF and FFF for 6MV and 10MV.

Confidence limits were established for ion chamber (3.1%), film (6%), and Delta4 (3.1%) measurements. All the confidence limits were comparable to TG119 institutions. We recommend that non-clinical plans (e.g. 10MV HN plans) not be included in TG119 evaluations. We also recommend that film continue to be used as the gold standard of multi-dimensional measurements, rather than be replaced by diode-based technology.