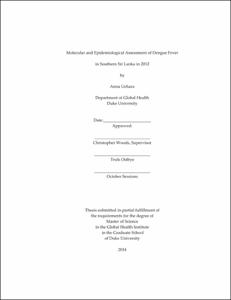 The mosquito-borne dengue viruses (DENV 1, 2, 3, and 4) have a rapidly expanding geographic range and have become endemic in over 100 countries with tropical and subtropical climates, including Sri Lanka. In Sri Lanka, dengue outbreaks have occurred primarily in Colombo, the capital, since the 1960s; however, recent reports suggest transmission throughout the island, with a second focus in the port city of Galle in the Southern Province. To better assess the emergence of dengue among fever-causing agents in the Southern Province of Sri Lanka, we collected epidemiological and clinical characteristics, as well as acute and convalescent sera, from febrile patients of 1 year of age or older without a defined source between June 1, 2012 and December 31, 2012 and compared with similar data collected in 2007. We performed whole genome sequencing on representative dengue isolates from Colombo and Galle to assess relatedness. Through serological testing for DENV IgM and IgG antibodies, virus isolation, and molecular testing, we confirmed acute dengue in 64.83% of the febrile population which was composed of DENV1 (93.8%) and DENV4 (6.2 %) serotypes. We did not detect DENV1 in 2007, nor did we detect DENV2 or DENV3 in 2012. Phylogenetic analysis of whole genome sequence from representative samples from 2012 demonstrated that most DENV 1 strains (25 of 26 tested) belonged to genotype 1 which was closely related to strains previously reported in Colombo during the 2009-2010 dengue season and that all DENV4 strains belong to genotype 1 These results support the spread of dengue virus strains from Colombo to southern Sri Lanka, but the timing and directionality of that movement remain unknown.