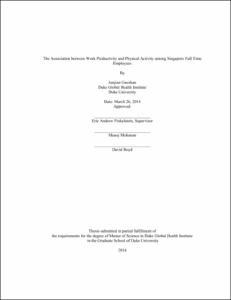 In this study, the association between work productivity and physical activity has been explored. The work productivity is measured by presenteeism and absenteeism together. Presenteeism implies a situation where a mentally or physically sick employee attend to work despite a medical illness that makes their job performance sub-optimal. It is recorded as a self-reported percentage of work efficiency loss in the study. Absenteeism implies having work absence because of medical condition. It is recorded as whether participants have medical absence in the past week. 928 valid responses from Singapore full-time employees have been analyzed using logistic models.

Results show that participants who had not met the WHO additional standard are less likely to have medical absence (OR=2.51, P<0.05). The longer time spent on physical activity is associated with lower work productivity (OR=1.001, P<0.05). I also found that the more frequent individual keeps healthy lifestyle, the lower presenteeism and absenteeism one will have.

The findings could be explained by several reasons. First, physically active participants have higher chance of physical injuries, leading to medical absence from work. Secondly, participants who had met the WHO additional standard are more likely to have lower income. Because of the labor leisure tradeoff theory, people who have lower income are less incentivized to trade leisure time for work. Therefore, the participants who had met the WHO additional standard have a lower medical absence rate. Thirdly, findings show that frequent healthy lifestyle is associated with higher work productivity. However, People who had met the WHO additional standard are less likely to have a frequent healthy lifestyle due to the lower social and economic status they have. Therefore, even though they have longer time spent on physical activity, the work productivity is still lower. Lastly, because of the work ethics in Singapore, employees ask for medical absence only due to urgent and serious medication conditions and such urgent and serious medical conditions cannot be prevented by physical activities.