The Effects of Health System Reform on Access to Health Services and Medicines for Patients with Chronic Non-communicable Diseases in Hangzhou and Baoji, China 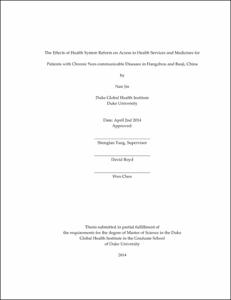 Chronic non-communicable disease has become the leading cause of mortality and morbidity in China, and the growing burdens of NCDs pose a tremendous challenge to economic growth. And since 2000, Chinese government has piloted and implemented a series policy initiatives to tackle financing of and access to health care. This study propose to evaluate the effect of health system reform on access to health services and medicines for patients with chronic non-communicable diseases.

Household surveys were conducted in Hangzhou and Baoji city in 2009, 2012 and 2013. Each year around 800 households in three urban districts within each city participated in the study and the study aim to assess the use of outpatient services and access to medicines of urban residents including patients with NCD. Meanwhile, focus group discussion with NCDs patients and healthcare providers at different levels of health facilities were used to supplement and explain the changes across time and the differences between the city.

Prevalence of self-reported NCDs was around 30% in either city and increased across time. The health seeking behavior in the two cities were quite different. In Hangzhou, more than half of residents referred to community health center/station for outpatient services, while Baoji had more patients visited hospitals. For purchasing medications, the majority of people chose private drug stores in Baoji, while in Hangzhou, more people prefer CHC. The total outpatient expenditures did not change a lot, and healthcare services were relatively more expensive in hospitals than CHC. And medical insurance did share risks and reduced financial burden for outpatient services in Hangzhou, since more people concentrated in the small amount of out-of-pocket payments; however, in Baoji, more people paid more than 100 Yuan out of their own pockets, especially for those visiting hospitals. In addition, the frequency of outpatient-visit increased between 2012 and 2013 and some patient shifted from CHC to higher level hospitals, which may be due to the implementation of essential medicine scheme and some of health insurance regulations.