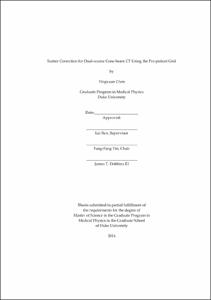 <bold>Methods</bold>:A 1-D grid was attached to each x-ray source during dual-source CBCT imaging to acquire partially blocked projections. As the grid partially blocked the x-ray primary beams and divided it into multiple quasi-fan beams during the scan, it produced a physical scatter reduction effect in the projections. Phantom data were acquired in the unblocked area, while scatter signal was measured from the blocked area in projections. The scatter distribution was estimated from the measured scatter signals using a cubic spline interpolation for post-scan scatter correction. Complimentary partially blocked projections were acquired at each scan angle by positioning the grid at different locations, and were merged to obtain full projections for reconstruction. In this study, three sets of CBCT images were reconstructed from projections acquired: (a) without grid, (b) with grid but without scatter correction, and (c) with grid and with scatter correction to evaluate the effects of scatter reduction and scatter correction on artifact reduction and improvements of contrast-to-noise ratio index (CNR') and CT number accuracy. The efficacy of the scatter reduction and correction method was evaluated for CATphan phantoms of different diameters (15cm, 20cm, and 30cm), different grids (grid blocking ratios of 1:1 and 2:1), different acquisition modes (simultaneous: two tubes firing at the same time, interleaved: tube alternatively firing and sequential: only one tube firing in one rotation) and different reconstruction algorithms (iterative reconstruction method vs Feldkamp, Davis, and Kress (FDK) back projection method).

<bold>Results</bold>: The simultaneous scanning mode had the most severe scatter artifacts and the most degraded CNR' when compared to either the interleaved mode or the sequential mode. This is due to the cross-scatter between the two x-ray sources in the simultaneous mode. Scatter artifacts were substantially reduced by scatter reduction and correction. CNR's of the different inserts in the CATphan were enhanced on average by 24%, 13%, and 33% for phantom sizes of 15cm, 20cm, and 30cm, respectively, with only scatter reduction and a 1:1 grid. Correspondingly, CNR's were enhanced by 34%, 18%, and 11%, respectively, with both scatter reduction and correction. However, CNR' may decrease with scatter correction alone for the larger phantom and low contrast ROIs, because of an increase in noise after scatter correction. In addition, the reconstructed HU numbers were linearly correlated to nominal HU numbers. A higher grid blocking ratio, i.e. with a greater blocked area, resulted in better scatter artifact removal and CNR' improvement at the cost of complexity and increased number of exposures. Iterative reconstruction with total variation regularization resulted in better noise reduction and enhanced CNR', in comparison to the FDK method.

<bold>Conclusion</bold>:Our method with a pre-patient grid can effectively reduce the scatter artifacts, enhance CNR', and modestly improve the CT number linearity for the dual-source CBCT system. The settings such as grid blocking ratio and acquisition mode can be optimized based on the patient-specific condition to further improve image quality.