Neuroethology of Social Attention in Primates 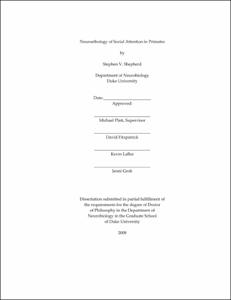 To solicit the attention or determine the intentions of another, we use our eyes. While many animals appear to use eyes as an important behavioral cue, for humans, these cues are especially critical. The power of the eyes to attract and direct attention shapes human behavior from an early age and likely serves as a foundation for social skill acquisition, ranging from simple, friendly eye contact to complex, spoken language, even to our almost mystical ability to empathize and "see the world through another's eyes". Humans have transformed our environment through our economic alliances and military competitions, and our individual successes and failures depend critically on social skills built on a foundation of shared attention. When these abilities break down, as in autism, pervasive social awkwardness can challenge the close relationship of individuals with their friends, family, and community. Nonetheless, we know almost nothing about the brain mechanisms that have evolved to process social cues and convert them into a rich experience of shared attention. To investigate this process, we explored the ability of human and nonhuman primates to follow the attention of other individuals. First, we characterized natural gaze-following behavior using a novel telemetric device in socially-interacting prosimian primates, and later in monkeys and humans responding to gaze cues in the lab. Finally, we examined the neuronal responses to gaze cues in a macaque posterior parietal area implicated in attention control--the lateral intraparietal area, LIP. Our findings suggest that gaze-following abilities may be widespread in social primates, relying on conserved, homologous brain pathways; and that they may not be informationally-encapsulated reflexes, but rather are densely interwoven with diverse social processes. Indeed, we found gaze cues influenced neurons in LIP, part of the dorsal frontoparietal attention network. Finally, we report that "mirror" neurons in parietal areas may thus play a role not only in representing perceived bodily actions, but also perceived mental states such as observed attention.